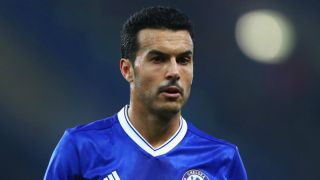 Chelsea winger Pedro is to travel back to the UK from their pre-season tour of Asia after suffering a concussion against Arsenal.

The Spain international clashed with opposition goalkeeper David Ospina as he chased a loose ball in the first half of the match in Beijing and required lengthy treatment from the Chelsea medical staff.

Pedro walked off the pitch nursing a bloodied nose and Antonio Conte opted against taking any risks, replacing him with Jeremie Boga.

He stayed overnight in hospital for observation and will now head back to London for further review.

The club had hoped the former Barcelona player would be able to link up with the squad in Singapore on Sunday ahead of next week's International Champions Cup clash with Bayern Munich.