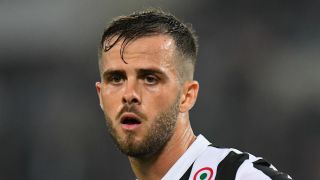 Juventus midfielder Miralem Pjanic distanced himself from reports suggesting he could be the next big signing for Barcelona or Chelsea, insisting he wants to continue his impressive progress in Turin.

While Manchester City boss Pep Guardiola ruled out a move for the Bosnia-Herzegovina international, he continues to attract attention from the Premier League and LaLiga.

Pjanic has been an integral part of Massimiliano Allegri's midfield since his arrival from Roma for €32million in 2016, scoring 10 goals in 61 Serie A appearances as he helped Juventus to consecutive league titles.

His good form, coupled with the €100m addition of Cristiano Ronaldo to Allegri's ranks, fuelled speculation over a move to Camp Nou or Stamford Bridge, but the 28-year-old remains focused on Juve.

"I listen to a lot of things that are not true," Pjanic told ESPN. "I'm cool. I'm preparing my new season. That's what's the most important.

"What I did the last two seasons for Juventus was really great, and I am happy what I'm doing here."

Pjanic expressed his excitement about lining up alongside Ronaldo, highlighting the Portugal forward's impeccable track record at Real Madrid and Manchester United as he looked forward to seeing him in black and white.

"We are happy that he's there," said Pjanic.

"I think Juve made a big signing, and the team are happy, he's happy, so I think he will do what he did also in the past, what he did at Man United and Real Madrid.

"He won a lot of titles. He did big and great things, and I think he will continue like that.

"He's a great player, and I think he can help his new club a lot. I think he will give a lot to Juventus."