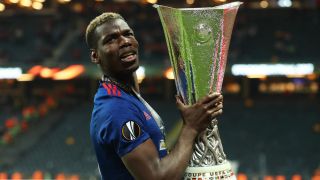 Pogba opened the scoring as United claimed a 2-0 win over Ajax in the Europa League final on Wednesday.

The France international was a world-record signing from Juve in the off-season, but his former club have had few problems without him, winning a sixth straight Serie A title and reaching the Champions League decider.

A Juve win against Real Madrid in Cardiff on June 3 would see the Italian giants face United in the UEFA Super Cup and Pogba welcomed that potential clash.

"If Juventus win the Champions League, I am very happy, very happy," he told Sky Italia.

"Then we would be in the Super Cup against them? True. But I can say good luck to my former team-mates."

Pogba was satisfied with the victory, saying: "We played to win.

"We wanted to do it right from the start of the competition. We got up there and we are very proud now."