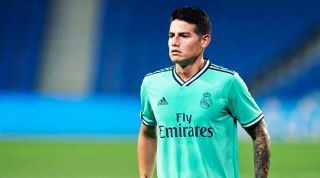 Real Madrid are planning a raid for highly-rated Napoli midfielder Fabian Ruiz, but they'll have to shift squad players if they want to make room for the Spaniard, with Zinedine Zidane looking to improve his squad on last year.

This has put Premier League clubs on alert - primarily Arsenal and Everton - who have been linked with Bernabeu stars this summer.

Arsenal are keen to bring Dani Ceballos back to the Emirates Stadium again this year, after the midfielder impressed on loan last season. After excelling in a deeper role under Mikel Arteta, the Spaniard returned back to his parent club for preseason, and it's thought that though Arsenal would love to take him back in one capacity or another this campaign, they're busy tying up other deals for now.

The 24-year-old is apparently a target for AC Milan, whose CEO Ivan Gazidis used to be the chief executive for the Gunners. According to reports, however, Ceballos has told Real that he's only interested in a move back to North London, should he leave.

Everton, meanwhile, are looking to tie up a sensational deal for Colombian superstar, James Rodriguez.

Rodriguez has had a tumultuous time in the Spanish capital after landing from Monaco, following his exploits at the 2014 World Cup. He has impressed on loan at Bayern Munich but spent last year in Real's squad, where he struggled to dictate games.

COMMENT How would Thiago Silva fit in at Chelsea?

Now, Everton are looking to bring him to Merseyside to add some creation to their side. The 29-year-old was signed by Carlo Ancelotti during his Madrid tenure, before the Italian took him on loan while manager at Bayern.

Real Madrid may have won La Liga comfortably in the end, but boss Zidane is keen for Los Blancos not to stand still.

The club have been linked with Paul Pogba - who looks like he's staying put at Manchester United - but Fabian Ruiz also offers a genuine upgrade to the tired legs of Luka Modric - who's now 34 - in the middle of the park. It's thought that Zidane will resist shuffling his pack too much, as he has a lot of talent at his disposal, but sees the Napoli metronome as a player to build around.

Real Madrid struggled to score goals last term but with Luka Jovic and Eden Hazard bedded in now and Brazilians Rodrygo and Vinicius Jr still developing, Real have plenty of options in attack. Martin Odegaard could yet stay at the club after a superb loan spell at Real Sociedad, while Gareth Bale looks set to see out his current contract.