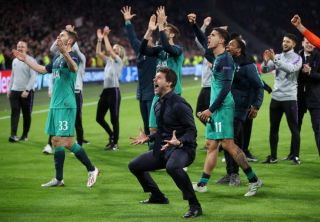 Tottenham and Liverpool will be part of history when they meet in the Champions League final.

The Premier League sides battle it out at the Wanda Metropolitano Stadium in Madrid on Saturday, three days after Chelsea beat Arsenal in the Europa League showpiece, making it the first time ever that all four European finalists have come from the same country.

It is also just the second all-English European Cup final, 11 years after Manchester United and Chelsea competed in Moscow.

Liverpool are back in the biggest game in European club football for the second successive year after they lost to Real Madrid last season and they chase a sixth crown.

Spurs, however, are in uncharted territory as this is the furthest they have ever gone in the competition, either in its guise as the European Cup, where they reached the semi-final in 1962, or the current Champions League format.

It is perhaps fitting that these two sides meet in the showpiece event, as although it is not quite the battle of the underdogs, both have had to get there the hard way.

Mauricio Pochettino’s men have been 10 minutes or less from going out of the competition on five occasions while Liverpool needed to beat Napoli in the final game to make it out of the group stage.

Then there was the small matter of their respective miraculous semi-final comebacks on consecutive nights.

The Reds appeared dead and buried after the first leg of their last-four clash with Barcelona as they succumbed to a 3-0 defeat at the Nou Camp.

But a magical night at Anfield saw them produce a stunning 4-0 win to eliminate their Spanish opponents, a success boss Jurgen Klopp hailed as “unbelievable”.

Spurs took inspiration from that 24 hours later as they recovered from a 3-0 aggregate deficit at half-time of their second leg against Ajax.

Lucas Moura inspired the comeback as his hat-trick, which was completed in the fifth minute of injury time, earned an away goals success.

Whichever manager triumphs in Madrid will see them shake off an unwanted tag.

Both Klopp and Pochettino are regarded as being among the best managers in the game for the respective work they have done at their clubs and the eye-catching style of play they deploy.

But neither have been able to back that up with trophies in England as both have fallen short in the big games.

Klopp also has previous in this competition having been a beaten finalist with Borussia Dortmund in 2013 and with his Liverpool side 12 months ago.

Liverpool’s incredible Premier League campaign, where they amassed the third-highest points tally ever but still finished second, will make them favourites against a Spurs side they took six points off.

But April’s match at Anfield will give hope to Pochettino’s side, as even though they lost, they dominated the second half and should have won.

They will be buoyed by the likely return of Harry Kane, setting up a shootout with Mohamed Salah that is just one of the many sub-plots of the game.

Both sides will think their name is written on the trophy given their respective journeys to the final.

But we will find out who is right in what will be a memorable night for English football on Saturday.