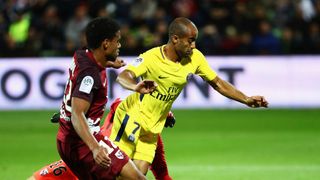 Lucas has made just six appearances in all competitions for PSG this season, all as a substitute, and is reportedly attracting interest from Manchester United and Tottenham.

Nantes, fifth in Ligue 1 and 17 points adrift of Unai Emery's side, were keen to give the Brazilian winger an option in a familiar competition, but Ranieri admits a transfer is unlikely to come to fruition.

"He's a high-class player, and with us he could have played in a league he knows instead of being a PSG substitute or going to another country," Ranieri told Le Parisien.

"He would have been available right now and could have six months away from the World Cup. But he made another choice. Never mind."

Nantes take on Ligue 1 leaders PSG at Stade de la Beaujoire on Sunday, a fixture Ranieri says his players need no motivation for.

"PSG are a great team, built not only to win the championship, but also the Champions League," added the Italian.

"Against other teams, I have to make sure to increase the attention and the concentration of the players to bring them into a good state of mind. You have to explain a thousand things.

"But against Paris, the boys are already perfectly focused on the match a week before kick-off. My job is to balance that concentration."