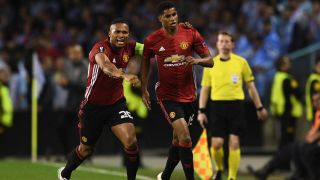 Manchester United teenager Marcus Rashford can cope with pressure and will only get better, according to team-mate Jesse Lingard.

Rashford, 19, delivered again for United in the Europa League, his free-kick securing a 1-0 win at Celta Vigo in the semi-final first leg on Thursday.

He has scored 11 goals in all competitions this season, including the extra-time winner to get his side past Anderlecht and into the semis.

Lingard has no doubt Rashford will improve, regardless of the attention he gets following his recent exploits.

"He's scored major goals for United and again he's got the important goal.

"He's still growing. He's going to fill out even more. His knowledge of the game and his game intelligence will continue to grow and he'll keep learning and go from there."

Rashford was criticised in the lead-up to the Celta clash after being accused of diving to win a penalty in a 1-1 draw against Swansea City.

Lingard backed his team-mate and praised Rashford for the way he responded in Spain.

"It's part and parcel of football," he said. "He's going to learn.

"People are always going to have an opinion. You've just got to focus on the next game and he's bounced back with that goal.

"Of late, he's been put on set-pieces and his corner delivery and free-kicks have been excellent. Close to goal he's got a real chance of scoring."

United sit fifth in the Premier League ahead of a trip to Arsenal on Sunday.