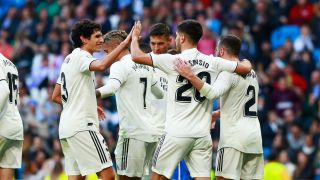 Isco offered a timely reminder of his quality to head coach Santiago Solari with a brace in Real Madrid's processional 6-1 win over Melilla in the Copa del Rey.

It meant a 10-1 aggregate triumph over their third-tier opponents to progress to the last 16, with Marco Asensio's quickfire double after the half-hour getting Madrid up and running.

Asensio then crafted a maiden senior strike for rookie centre-back Javi Sanchez, with Isco – making his first start under Solari – netting brilliantly in the 47th minute.

Vinicius Junior got in on the act and Isco's second came after Yacine Qasmi converted a consolation penalty for the visitors.

It left Asensio to show his team-mates how it should be done as he eased through an already-tiring defence in the 33rd minute and caressed a finish past Pedro Luis.

Right-back Pepe Lopez was beaten far too easily by Vinicius, as he set up a second for Asensio, who then turned provider with a chipped pass for Javi Sanchez to volley in off the underside of the crossbar.

Isco spectacularly got in on the act early in the second half, clipping a brilliant 25-yarder into the top corner – earning Solari's applause as the Bernabeu faithful sung his name.

There was less to shout about for Vinicius, who rounded Pedro Luis but could only bundle a finish into the side netting before the goalkeeper repelled a later strike with his feet.

Persistence paid off for the 18-year-old, who unfurled a celebratory jig in the 75th minute after beating Pedro Luis at the second attempt.

Javi Sanchez blotted his afternoon with the foul that allowed Qasmi to send Keylor Navas the wrong way before Isco was given space to lash into the bottom corner from 10 yards in the 83rd minute.

What does it mean? Isco still a Bernabeu favourite

It has been a testing few weeks for one of the most gifted players in Spain. Handed the captain's armband for his return to the starting XI, a week on from being dropped from Solari's squad to face Roma in the Champions League, Isco's first stepovers brought cheers from the Madrid faithful. He had them in the palm of his hand thereafter, albeit against limited opposition.

If you were to list Real Madrid personalities for whom this season has not quite gone to plan, Asensio would not be near the top. However, one goal from 14 LaLiga appearances is a suboptimal return for such a lavishly-gifted attacker. Scoring two and creating another here might be the spark he needs.

A goal and an assist on his first start at the Santiago Bernabeu is not a shabby return for Vinicius, but he might rue the wayward finishing he produced before finally getting on the scoresheet. A hat-trick or more might have pushed him closer to LaLiga starts for a Madrid team lacking a clinical edge this term.

Solari's men travel to Huesca on Sunday, while Melilla continue their Segunda B promotion bid at home to VIllanovense.