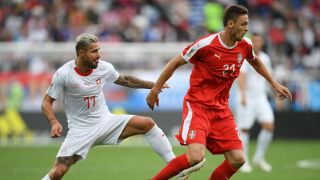 Serbia had taken an early lead through Aleksandar Mitrovic, but conceded second-half goals from Granit Xhaka and Xherdan Shaqiri to leave them needing a win over Brazil in their final Group E game to qualify for the last 16.

Mitrovic had been denied what looked a clear penalty before Shaqiri's winner, the 23-year-old wrestled to the ground by Fabian Schar and Stephan Lichtsteiner at the far post.

A free-kick was even given to Switzerland for the incident, much to the frustration of Matic, who had choice words for Brych.

"The referee was a disaster," the Manchester United midfielder said.

"He did not punish evenly. He could have looked at VAR. He gave us cards, but did not call every foul.

"We're sorry. We gave it our best. We gave away two cheap goals. It was all wrong, that is what we thought in the dressing room. Now we have to recover.

"It's very difficult because we play Brazil and as you know they are one of the best teams in the world, so it's going to be hard. But in football anything is possible."

Aleksandar Kolarov, meanwhile, is confident that they can overcome the five-time winners to book a spot in the knockout stages.

"We know Brazil is a great team. We will try to prepare for the game in the best way in these four or five days. We'll give 100 per cent."