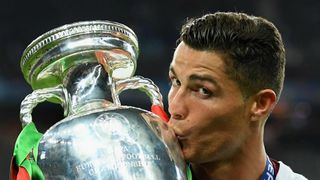 Cristiano Ronaldo does not believe Portugal are among the favourites to win the World Cup in Russia, with Brazil and Spain instead tipped by the Real Madrid star to claim the trophy.

Portugal face Spain in their World Cup opener on June 15 before facing Morocco and Iran in their remaining Group B fixtures.

The Iberian derby promises to be one of the great matches of the group stage, but Ronaldo thinks Spain have a better chance of winning the World Cup than Euro 2016 champions Portugal.

"We are not favourites," Ronaldo told Desimpedidos. "We have to be honest and humble and understand that, theoretically, there are teams with stronger names, like Brazil, Spain, Germany, also Argentina.

"We're not favourites but everything is possible in football. We'll try to qualify from the group stage. After that, we don't know."

President Čeferin was on familiar ground last night as he handed the trophy to Portugal in his home city of Ljubljana, Slovenia  February 11, 2018

Ronaldo had to watch Portugal win Euro 2016 from the bench after being substituted in the final victory over hosts France due to injury, Eder scoring an injury-time winner.

"I had the goal to be a professional and to play for the Portugal national team," the 33-year-old said.

"At that point, there were players that stood out in the national team, like Rui Costa, Fernando Couto, [Luis] Figo. I always looked up to them. I had to play beside them.

"Deco, too, but he came after that. I entered the national team at the same time as Deco."

Portugal have never won the World Cup but the five-time Ballon d'Or winner does not feel he needs to triumph at the tournament to complete an incredible career.

"Honestly, I don't think so," Ronaldo said when asked if he has any more goals. "I achieved everything I dreamt of in football.

"We can all have dreams and goals but I achieved so many beautiful things that I don't have any dreams left.

"If you ask me if I want to win the World Cup... of course! But if I had to end my career right now, I would be very proud. I never thought my career would be so beautiful."