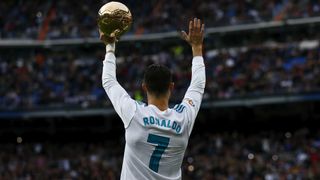 Cristiano Ronaldo decided to mark a trip home to Madeira by putting on a lavish display of his personal silverware.

The Real Madrid superstar won his fifth Ballon d'Or in 2017 and arranged all five trophies at the centre of an impressive personal haul in an Instagram post.

Pictured in Funchal, the capital of the Portuguese archipelago, Ronaldo posed with his collection of individual trophies including four European Golden Shoes, three UEFA Best Player in Europe Awards and the Best FIFA Men's Player gong, which he has won in each of the past two years.

The 32-year-old also paid tribute to the team-mates, coaches and fans who have helped him during his career.

"When I played in the streets of Madeira and dreamed of reaching the top of the football I could not imagine that one day I would take a picture like this," he wrote.

"I dedicate this moment above all to my family, my friends, my team-mates, the coaches with whom I have always learned and so many others at my clubs and with the national team.

"Finally, a special thanks to my fans. These trophies are yours too!"

Real Madrid are back in action against Numancia in the Copa del Rey on Thursday before resuming their Liga campaign at Celta Vigo this weekend.

The 3-0 Clasico defeat to Barcelona before Christmas left Zinedine Zidane's side fourth in the table, 14 points behind their bitter rivals at the summit.