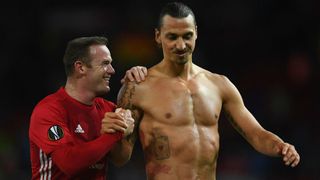 Wayne Rooney is to embark on an American adventure after agreeing to join MLS side DC United on a three-and-a-half-year contract.

Rumours have been circulating for well over a month that Rooney's return to boyhood club Everton would come to an end after just one season in favour of a new start stateside.

Manchester United and England's record goalscorer joins a host of star names who have chased a final career flourish in MLS.

Here, we look at how some of Rooney's countrymen, former team-mates and rivals have performed.

Very much the trailblazer for the superstar acquisitions in the modern era of MLS, Beckham joined Galaxy from Real Madrid in 2007. The Manchester United great's loan moves to AC Milan in 2009 and 2010 soured his relationship with a section of his parent club's fanbase but he left as he arrived – a hero following MLS Cup triumphs in 2011 and 2012. Having exercised an option in his MLS contract to purchase an expansion franchise, Beckham's Miami team are set to enter the league in 2020.

Arsenal's record goalscorer, Henry picked up the Champions League crown that had eluded him with Barcelona in 2009. A year later the France forward was bound for New York and he was named in the MLS All-Star XI in each of his four full seasons with the Red Bulls. Despite his team finishing 2013 with the best regular-season record, MLS Cup glory remained elusive before Henry moved into retirement.

Parallels will most readily be drawn between Beckham and Zlatan Ibrahimovic, but Galaxy fans would sooner see him replicate Keane's exploits. The Republic of Ireland favourite landed in Los Angeles in 2011 to star alongside Beckham initially. He was the club's top scorer and named their MVP for four consecutive years from 2012, while 2014 brought a third MLS Cup for the ex-Tottenham forward.

The last player other than Lionel Messi and Cristiano Ronaldo to win the Ballon d'Or, Kaka became the highest-paid player in MLS history when he joined Orlando City for their maiden campaign in 2015. A free-kick on debut to snatch a draw against New York City instantly endeared him and the Brazil icon hung up his boots last year with 24 goals in 75 MLS appearances.

Spain's all-time leading goalscorer, Villa arrived ahead of New York City's MLS debut in 2015 as the franchise's captain. Although the Manchester City-affiliated club are yet to win a major honour, it is not for the want of trying on Villa's part. The 36-year-old former Valencia and Barcelona forward has scored 71 MLS goals in 104 appearances and his form even earned a Spain recall last year.

Pirlo followed Villa to New York City after his renaissance at Juventus helped to inspire for consecutive Serie A titles – a run his former club have continued to add to. The 2006 World Cup winner made 62 appearances in MLS, operating for the bulk of this time at what could charitably be termed a regal pace, with his flashes of brilliance increasingly dimmed amid the league's physicality.

After his second spell at Chelsea, Drogba made an explosive start to life in MLS, netting 11 goals in as many 2015 regular season games for Montreal. His form tailed off in 2016 and a deteriorating relationship with head coach Mauro Biello was a factor in the Ivory Coast striker's 18-month stay coming to an end. Drogba's American adventure has continued as player-owner with Phoenix Rising of the United Soccer League.

Lampard's arrival in New York was delayed by a half-season stay at Manchester City being extended for all of 2014-15, prompting similar fan reaction to the European returns of former England team-mate Beckham. Thankfully for Lampard, the goalscoring Midas touch from midfield had not deserted him and 15 goals in 31 MLS games – including the club's first ever hat-trick - stood as a decent attempt to get supporters back onside.

Another Liverpudlian and ex-England captain, Gerrard joined Galaxy in 2015. The sight of him wearing a club shirt other than Liverpool's was jarring and Gerrard failed to make a similar impression to Beckham and Keane in the City of Angels, with an MLS Cup to add to Galaxy's glorious run between 2011 and 2014 proving out of reach.

Frozen out by Jose Mourinho at Manchester United, Germany and Bayern Munich great Schweinsteiger moved to Chicago Fire last March. A debut goal in a 2-2 draw against Montreal Impact instantly endeared the midfielder and he helped to steer Chicago to their first appearance in the play-offs after a five-year drought.

Ibrahimovic's arrival at Manchester United for the 2016-17 season hastened Rooney's move towards the Old Trafford exit door as the Sweden great made the centre-forward role his own. The other side of a cruciate knee ligament injury, the 36-year-old decided to make the move to Los Angeles and he proved a hit on and off the pitch. An astonishing long-range strike came as part of a debut brace to sink local rivals LAFC 4-3 and Ibrahimovic became a man about town at basketball games and on late-night talkshows. Six goals in 10 subsequent MLS appearances have followed and there is little doubt who Rooney is wrestling with for top billing.