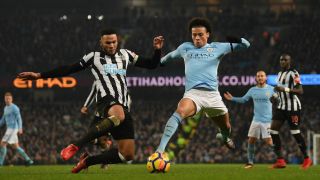 Leroy Sane's star quality offered a timely weekend boost to Manchester City boss Pep Guardiola as Alexis Sanchez prepares to take up residence on the other side of town.

Back in action for the first time since their first top-flight defeat of the season at Liverpool, the Premier League leaders were 2-1 up but enduring a nervy spell in Saturday's home match against Newcastle United.

It fell to Sane to offer a demonstration of his game-breaking qualities. The Germany international took possession and embarked upon a dizzying dribble past a succession of challenges before squaring for Sergio Aguero to complete his hat-trick and seal the points.

The 22-year-old has racked up 10 goals and 13 assists from the left-hand side of City's attack this season – a position from which Sanchez likes to operate. It's a return that suggests the Chile star's decision to join Manchester United despite Guardiola's lengthy courtship might well grant him a less troublesome route to the first XI.

"He suffered in the first six months of last season but in the last six months and this season he is playing at a high, high level," Guardiola told reporters when discussing Sane's development since joining City from Schalke for a reported £37million in September 2017.

"I don't want to tell him very nice, nice words because I have a feeling he has a lot of things to improve.

"But, of course, the most important thing against the teams who defend so well [like Newcastle] are the guys who can take a risk, to be aggressive against them. The guys who have the ability to dribble and a chance to shoot. And he did it.

"At 2-1, the game is always open. He decided, "I go, I go" and made an amazing action. Sergio's control and finishing was good.

"[Raheem] Sterling did the same, three or four times attacking central defenders. It is so complicated to attack 11 players when they defend so deep.

"But my feeling is we are learning how to attack in that way. The counter-attack is a natural way but we are able to do two faces. It is so important."

Good response tonight to last week - back on track January 20, 2018

Sane might be removed from the starting line-up for the second leg of the EFL Cup semi-final against Bristol City on Tuesday, with Aguero's goalscoring expertise having secured a slender 2-1 first-leg advantage over the Championship side.

However, Guardiola will settle down with a glass of his favourite tipple before making any rash decisions.

"Normally I don’t think about what we are going to do next until after my glass of red wine," he added, with regards to his selection for the game at Ashton Gate, with opposite number Lee Johnson having spent £450 on a bottle to woo United boss Jose Mourinho in the previous round.

"After red wine, a little bit of alcohol in my body, my focus is much better.

"Of course we are going to try to say 'the best team possible'. But to say Bernardo Silva, [Ilkay] Gundogan and [Eliaquim] Mangala are not able to play, that will not be fair.

"What I want to say is will we go there to try to win the game and go to the final. That is true."