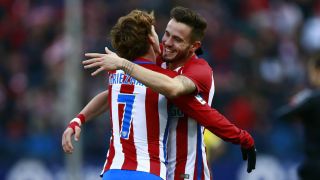 Saul described the importance of Antoine Griezmann to Atletico Madrid but insisted no one is above the club amid links with Manchester United.

France international Griezmann is being widely tipped to swap Atletico for Premier League giants United in the off-season.

Griezmann scored 26 goals in all competitions as Atletico finished third in LaLiga and reached the Champions League semi-finals in 2016-17.

Saul, however, believes the 26-year-old forward can be replaced if he opts to leave the Spanish capital.

"In the end, Antoine Griezmann can manage his future as he wishes," Saul said via Marca and AS Diario.

"He is with us. We are waiting for him in pre-season and finally his future he will decide.

"He is a very important player for us, we know the quality he has, but most importantly no one player is above the club."