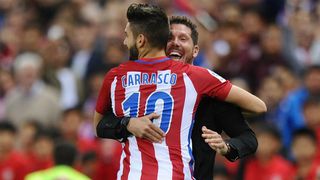 Yannick Carrasco was the subject of special praise from Diego Simeone after the Atletico Madrid coach said his winger has "developed hugely" since joining the club.

The Belgium international arrived from Monaco in a reported €20million deal from Monaco at the start of last season and often found himself rotated in and out of the team.

As a result, Carrasco only managed to score four goals and set up one more in his debut LaLiga campaign.

But this term the 23-year-old has stepped things up, scoring eight times and laying on another four for team-mates, and Simeone is hopeful that improvement will continue.

Speaking to the media ahead of Tuesday's visit of Real Sociedad, Simeone said: "Since his arrival at the club it's fair to say he [Carrasco] has developed hugely as a player.

"Last season there were less goals and assists, he didn't have the continual form on the pitch, less intensity and also when winning back the ball.

"Since then he has improved hugely. That's why we need footballers with different types of talent to their team-mates, because he has pace and is good when one-on-one and can shoot from distance.

"So obviously he has scored more goals this season. So I hope that he continues in this vein of form.

"We need that. He is a really important player for us. So we hope that he can continue performing in this way this year and that he can have another good year."

And Simeone is particularly wary of striker Willian Jose, who returned from six weeks out with a muscle injury at the weekend.

"I always believe that there are players that are hard to replace," Simeone said. "The presence of Willian Jose as a player is really important for them.

"He is a really strong striker, he gives them lots of options up front. He can hold the ball up well.

"If he returns [to the starting XI] obviously he will improve their level of attack."