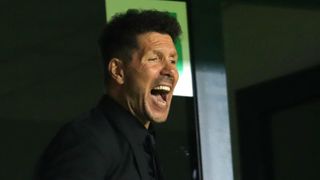 The Argentine was serving a touchline ban as Atleti beat city rivals Real Madrid 4-2 after extra time in a thrilling UEFA Super Cup in Tallinn on Wednesday.

Diego Costa struck a brace as Atletico followed up their Europa League triumph with their first title of 2018-19, Saul Niguez and Koke wrapping up victory in the added period.

The 2018 UEFA Super Cup adds to their success in the competition in 2012 under Simeone, as well as the Copa del Rey and Supercopa de Espana titles they have won since he took charge seven years ago.

Atleti's top honour under Simeone remains the 2013-14 LaLiga title, and they look set to challenge Madrid and Barcelona again this term.

Last season's Europa League triumph was the second under Simeone, who has now won more major honours than the six titles collected by Luis Aragones across his four spells at the club.

He also becomes the first Atletico manager to win a final against Real Madrid in three different competitions having triumphed against the club's neighbours in the Copa del Rey, Supercopa de Espana and UEFA Super Cup.

In contrast, Julen Lopetegui became the first Madrid coach to lose his first competitive game in charge since Bernd Schuster in 2007.

Lopetegui is also the first Real Madrid coach to concede four or more goals in his first competitive game in charge since Michael Keeping against Celta Vigo 60 years ago.