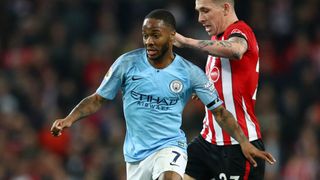 Pep Guardiola said Raheem Sterling can achieve "whatever he wants" in football but stopped short of placing him among the world's best players after he scored his 50th goal for Manchester City.

Sterling, 23, netted his milestone strike as part of a double in a 6-1 victory over Southampton at the Etihad Stadium, notching once either side of half-time and supplying two assists as the champions ran riot.

Guardiola was effusive in his assessment of the England winger's performance, but resisted the opportunity to rank Sterling as one of the game's leading performers.

"Raheem is a top player. But still he is so young to consider among the world's best players," said the Catalan.

"He is in incredible form right now, he's, sharp, fast, clever, fighting, ambitious, decisive, can play on both sides, in the middle, and receives the ball behind lines.

"He always commits the central defender with a lot of aggression. It was an incredible performance - with and without the ball.

"But still, with the young players like him and Leroy [Sane], I would like to feel that still they can improve. Still he loses simple balls, in the Tottenham game he made an assist in the first minutes but after that he lost a lot of balls.

"Of course, his quality one against one is incredible, and he had an incredible game.

"If he is stable and he focuses on what he has to do to become a better and better player, if he has this on his mind, he can reach whatever he wants."

Despite the emphatic nature of City's victory, Guardiola admitted his side's defending can improve after Southampton squandered chances to narrow the deficit.

"When they were close to our box there was the feeling they can score goals. In the Champions League if you concede in those situations you are out because the level is higher."

Southampton manager Mark Hughes felt the opening 15 minutes, in which Wesley Hoedt scored an own goal and Sergio Aguero struck, set the tone.

"Any other work you've prepared in the week and the game plan that you want to implement against a very good Manchester City side goes out of the window when you concede so early," said Hughes.

"In the first 10 to 15 minutes of any game you have to be stronger than we were in that period.

"In the second half we were better and attacking-wise we had good moments, but we were never going to get anything out of this game unfortunately because of the opening period."