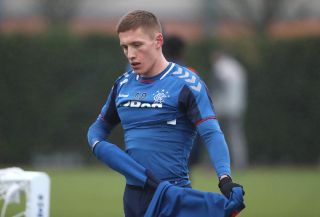 Sunderland are poised to win the race to land Rangers midfielder Greg Docherty on loan, the PA news agency understands.

Charlton have also made contact with Ibrox chiefs about taking the 23-year-old former Scotland youth international for the remainder of the season but the Stadium of Light is Docherty’s preferred destination.

Winger Jamie Murphy, meanwhile, is also set for a move this month with Burton ready to make a loan offer.

Boyhood Rangers fan Docherty has featured just five times for Steven Gerrard’s team this year but is not yet ready to give up on his dream.

And he feels the opportunity on offer with Phil Parkinson’s Black Cats – who recently signed Docherty’s former Light Blues team-mate Kyle Lafferty – could yet help him prove to Gerrard he has a long-term future in Govan.

The former Hamilton player made his Rangers switch in January 2018 but was farmed out to Sky Bet League One side Shrewsbury last season.

He made the most of that move and was named player of the year by the Shrews faithful. He returned to Glasgow last summer but has been unable to dislodge Ryan Jack, Steven Davis and Glen Kamara from the Rangers midfield.

Gerrard is a fan of Docherty’s approach but admits it is unfair to keep him kicking his heels in the stands when he is at a point in his career when he needs to be playing games.

Speaking last month, the Rangers boss said: “There will definitely be people leaving the football club in January.

“But the squad is too big and we want to try to trim that ahead of the second half of the season.

“Some players are doing nothing wrong at all. In fact some are doing more than enough to be recognised and put in. Unfortunately we can only put in 11 or pick 18 in the squad.

“The challenge for me is looking players in the eye and saying, ‘Look, you’re doing nothing wrong but I still can’t get you in’.

“That’s down to the form of other individuals in their positions. For example, Greg Docherty has been absolutely magnificent with his professionalism and training really well – but in his position we’ve had Ryan Jack who is arguably our player of the season.

“Greg has done absolutely nothing wrong so I have to be respectful for him and understand his situation. Maybe the best thing for him is to go play football. I can’t stand in his way then.”

Gerrard has already allowed Eros Grezda and Andy King to leave this month and it appears Docherty and Murphy will be next.

Murphy has also struggled to break back into Gerrard’s team after suffering a serious knee injury last season.

He is fit again, however, and is attracting attention from Burton boss Nigel Clough, who he knows him from his previous stint at Sheffield United.