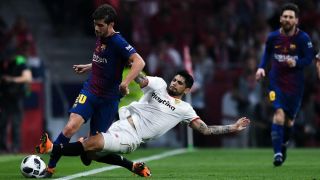 The 2018 Supercopa de Espana between Barcelona and Sevilla will be played as a one-off encounter, "probably in Tangier" and against the latter side's wishes, Royal Spanish Football Federation (RFEF) president Luis Rubiales has confirmed.

RFEF had not made a secret of their desire to shake things up with Spain's traditional season curtain-raiser, which is usually a two-legged affair comprising of home-and-away fixtures for the clubs involved.

Sevilla, who qualified for the Supercopa by virtue of reaching the Copa del Rey final last season, expressed their annoyance at RFEF's proposal and claimed they would reject any such suggestions.

The Andalusian club said they had already made a commitment to their supporters regarding two matches and that they had to look out for the best interests of fans.

Nevertheless, RFEF have gone ahead and confirmed the trophy will be contested over a single match on August 12 and is likely to take place in Morocco.

When asked why he wanted the game to be played in Tangier, Rubiales said: "There are some economic conditions.

"It will cover the entire trip and the stay, there will be 6,000 tickets for each of the clubs, the rest of the tickets will be sold online.

"We have looked for other options, but in terms of financial compensation they did not come in. We want the stadium to be filled for the Supercopa, and that's why we have looked for a smaller stadium.

"Playing in Seville or Barcelona did not give us that option. LaLiga and the Association of Spanish Footballers [AFE] support the decision of the RFEF."

Despite Rubiales' comments, Sevilla insist the RFEF still have not communicated anything to them in an official capacity about the Supercopa.

In the face of media questions and news articles relating to the decision on the Supercopa de España as a one-leg fixture, Sevilla FC clarifies that the Federation has still not made any official communication to the Club.July 9, 2018

A statement on their official Twitter account read: "In the face of media questions and news articles relating to the RFEF decision on the Supercopa de Espana as a one-leg fixture, Sevilla FC clarifies that the Federation has still not made any official communication to the club."