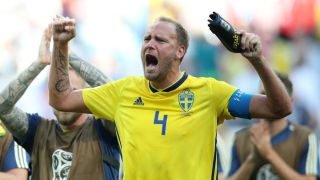 Andreas Granqvist praised the use of VAR in Sweden's 1-0 World Cup win over South Korea on Monday.

The 33-year-old team captain scored the only goal of the game from the penalty spot in the second half at Nizhny Novgorod Stadium.

Referee Joel Aguilar initially decided Kim Min-woo won the ball when sliding into a challenge on Viktor Claesson in the area, but changed his call after watching a replay provided by the video assistant team.

Granqvist made no mistake after the lengthy delay, sending goalkeeper Jo Hyeon-woo the wrong way to score Sweden's first World Cup goal since 2006, and the centre-back was relieved to see the controversial review system used to good effect.

"We felt there was an incident in the first half with Ola Toivonen, when the referee didn't award one, and that was correct," he told a news conference.

"It takes a while with the VAR but we're very pleased we had it today. You have to focus mentally but I was calm, I waited for the goalie, I tried to score in the corner."

2002 - Andreas Granqvist's goal was the first penalty scored by Sweden at the World Cup since 2002, when Henrik Larsson netted against Nigeria. Slot. June 18, 2018

Sweden passed up a handful of opportunities before Granqvist's 65th-minute winner, with striker Marcus Berg missing two clear-cut chances in the first half alone.

Granqvist admits they could have killed the game off sooner but hailed his side for showing the same resilience that got them through a two-legged qualification play-off against Italy.

"It's wonderful to be here as a winner," he said. "We knew how important this match was after watching Mexico beat Germany, making the group even tougher.

"We showed excellent attitude, we showed this in the play-offs. We could have started the first half better but then we took over and we created three or four excellent opportunities.

"We could have had the ball in the net at least twice. We got the penalty and then we were just fighting until the end."