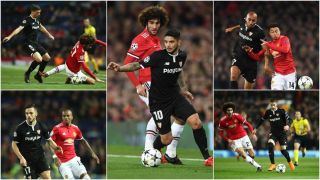 The idea Manchester United lost to a significantly inferior Sevilla side in the Champions League on Tuesday did not sit well with Jose Mourinho, who is adamant "many" of the Spanish club's players would go straight into his starting XI.

Although Sevilla – fifth in LaLiga – have been erratic this season, they left Old Trafford with a 2-1 win thanks to Wissam Ben Yedder's heroics off the bench – the French striker scoring a brace within six minutes of his introduction.

During a fractious news conference on Friday, Mourinho insisted Sevilla's victory was not as much of a surprise as many claimed it to be, convinced Vincenzo Montella had at his disposal numerous players who would have little difficulty getting into the United team.

He said: "Do you think they didn't have any players who could play direct in my team? I cannot name them – if I name them their agents will jump with happiness and they will say: 'Tag, tag, price', this and that. In Sevilla, there are many players who would play in my team."

Mourinho says he cannot name them, but we can.

The boss wraps up a passionate 12-minute message to fans during his press conference… March 16, 2018

Having struggled early on in a physical tussle with Lukaku, Lenglet subsequently took a step back and decided to read the game instead of trying to confront the Belgian one-on-one, a shift that saw him take charge in their personal duel. Given the inconsistency of all of United's centre-backs, perhaps with the exception of Eric Bailly, 22-year-old Lenglet would be an interesting option. They will need to act quickly, however – Barcelona are lurking.

United's problems at left-back are well-documented, but Sevilla's Escudero would solve them once and for all. Initially signed as a cheap back-up option, he established himself as a key part of Jorge Sampaoli's side last term because of his incredible capacity to get up and down the flank and be effective at both ends of the pitch. Ashley Young's days as United's improbable first-choice left-back would be long gone with Escudero's arrival.

Undoubtedly the jewel in Sevilla's crown, there is no other player in Montella's squad who is missed as much as Banega when he is absent. A ferocious competitor, technically immense and a calming presence on the ball like none of his opponents on Tuesday, Banega is the midfield metronome United fans want Paul Pogba to be.

By no means a stranger to United given his days with Blackburn Rovers and Stoke City in the Premier League, but N'Zonzi's talents have arguably only been truly admired since moving to Spain. An elegant and effortless style on the ball catches the eye, but he is just as adept at destroying in front of the back four. He alone did the jobs Marouane Fellaini and Nemanja Matic were deployed to do in United's midfield.

Although Alexis Sanchez, Jesse Lingard and Marcus Rashford have all been shunted out to the right flank in recent times, none of them have had much of an impact there. Sarabia, handed his Real Madrid debut by Mourinho in 2010, has scored 19 goals and set up another 23 in all competitions since the start of last season from his right-wing berth, including a perfectly weighted pass for Ben Yedder's opener on Tuesday. He may not be the most thrilling choice, but he is mightily effective.

Perhaps Ben Yedder would only be a rotation option at United given Lukaku's presence, but with Zlatan Ibrahimovic heading out, Mourinho could do with more options. The Frenchman has struggled at times this season, though that is arguably down to playing in a side that does not create a huge amount of chances. Against United he showed just how useful he can be, coming off the bench and producing a clinical display. Comparisons with Javier Hernandez would not be wide of the mark, though Ben Yedder is significantly more gifted technically.