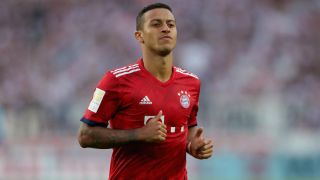 Thiago Alcantara is in a lot of pain and will have tests on an injury suffered against Rodinghausen, Bayern Munich boss Niko Kovac says.

The Spain international limped out of Tuesday's 2-1 DFB-Pokal victory after receiving treatment on the sidelines and was replaced in the 75th minute by Serge Gnabry.

Kovac confirmed Thiago will be checked over by medical staff on Wednesday, with his ankle thought to be the main source of his discomfort following a foul by Bjorn Schlottke.

"He's in a lot of pain at the moment, but we will wait and see what the examination reveals [on Wednesday]," he told reporters.

A picture appeared on Bild showing Thiago leaving the stadium on crutches after the match.

Sporting director Hasan Salihamidzic told reporters: "We don't know what it is yet, but it doesn't look good."

Bayern battled to victory thanks to early goals from Sandro Wagner and Thomas Muller, despite Linus Meyer's second-half strike.

They resume Bundesliga action against Freiburg on Saturday.

Niko on : "He's in a lot of pain at the moment, but we will wait and see what the examination tomorrow reveals."October 30, 2018