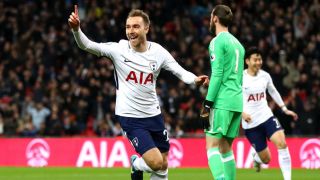 Christian Eriksen scored after just 11 seconds as Tottenham ended Manchester United's unbeaten run in 2018 with a 2-0 victory at Wembley on Wednesday.

The Denmark star capitalised on poor defending straight from kick-off in the first half before a dreadful own goal from Phil Jones doubled Spurs' lead before the break to seal the win.

Eriksen scored the fastest goal ever conceded by United in the Premier League when he pounced on the visitors' failure to clear a simple long ball.

Jose Mourinho's side, in which Alexis Sanchez was making his first league start since his move from Arsenal, had a bright spell thereafter but went two down before the break when Jones turned in Kieran Trippier's cross.

New signing Lucas Moura was presented to the 81,978 fans – a record in the Premier League –  at the interval and the party atmosphere largely continued for the rest of the match, with United offering meek resistance against a Spurs side held by Newport County in the FA Cup last Saturday.

Indeed, it could have been much worse had fifth-placed Spurs made the most of second-half openings, and there is likely to be a lengthy inquest into the manner of United's defeat before Huddersfield Town's visit this weekend.

United went into the contest without conceding a goal in 2018, but it took just 11 seconds for that run to come to an end.

Jan Vertonghen received the ball from kick-off and cleared it long, Harry Kane won a header against Jones and Eriksen placed a simple finish past David de Gea after Chris Smalling and Ashley Young made a mess of clearing their lines.

There was some controversy about the goal, however, as television replays showed Kane had run into United's half before the kick-off was taken, with the officials failing to notice.

The visitors responded well to the setback but seemed to lack patience in attack, with Romelu Lukaku spurning a good chance with a poor pass and Anthony Martial blazing over when space opened up on the edge of the area.

United gifted Spurs their second just before the half-hour mark, though, as Jones side-footed the ball high into his own net from Trippier's cross when it had looked easier to clear.

3 - Tottenham Hotspur have now benefited from three own goals in the Premier League this season; more than any other team. Helpful. January 31, 2018

Dele Alli had shouts for a penalty waved away after a risky challenge by Antonio Valencia, and United were angry not to win a spot-kick of their own early in the second half when Son Heung-min blocked Sanchez's header with his arm.

Spurs were in total cruise control, though, and should have made it 3-0 when Son saw a shot parried by De Gea, after which Mourinho surprisingly took off Marouane Fellaini, who had only replaced Paul Pogba seven minutes earlier.

It made for a poor end to a dreadful performance from United, who are now surely unable to catch City at the top of the table, while Spurs move to within two points of Chelsea in fourth after the champions' shock home defeat to Bournemouth.