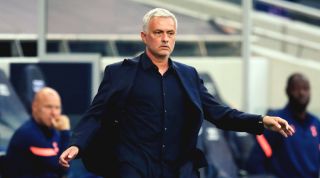 Tottenham Hotspur have already made moves in the transfer window for Joe Hart, Pierre-Emile Hojbjerg and Matt Doherty - but are still targeting a back-up striker.

Spurs's reliance on England captain Harry Kane has been evident over the last few seasons, but the club have tried to bring in other options to play in his absence. Vincent Janssen was signed from AZ Alkmaar in 2016 and had an ill-fated spell, before Fernando Llorente was signed a year later.

The Spaniard left the club last summer with academy graduate Troy Parrott coming through the ranks but with Parrott now on loan at Millwall, Jose Mourinho is keen to bring in another striker perhaps more able to compete at the top level.

Tottenham have made enquiries about five strikers across Europe - with Europa League qualifiers coming up and fixture congestion imminent, the club are keen to tie up a deal soon.

EXCLUSIVE 'We tried to get Timo Werner at Tottenham': Former Spurs scout has his say on Chelsea's new signings

Most recently, Spurs have apparently had a loan move for Torino forward Andrea Belotti rejected. The 26-year-old is captain of the Turin-based side and has never shown an interest in leaving; it's unlikely that Spurs will be offering too much money either, so this one seems like a long shot.

Napoli and Poland striker Arkadiusz Milik, also 26, is also unlikely to be moving to North London in this window. Mourinho is a big fan of the player and has been for a while but reports indicate that Tottenham have had an approach rebuffed. It will apparently take €30m to prise Milik from Napoli - a price Daniel Levy is not interesting in paying.

KYLIAN MBAPPE PSG star tells the club he will leave at the end of the season, with Premier League sides on alert

RB Salzburg talent Patson Daka may come cheaper - should Spurs convince him to join. The 21-year-old Zambian is highly thought of by a number of top clubs, including Liverpool, Manchester United and Tottenham's bitter rivals Arsenal. He is, however, content to remain developing at Salzburg and isn't in a rush to push through a deal - it would take an enticing offer to convince him otherwise.

Norwegian striker Alexander Sorloth is tearing up the Turkish league at Trabzonspor on loan from Crystal Palace. He's another name that Spurs are considering, though he's at the lower end of the price spectrum.

One more talent that Spurs are looking at is Braga striker Paulinho. The 27-year-old has hit double figures in the past four seasons and averaged better than one goal every other game last season. Wolverhampton Wanderers were interested in the player before settling on wonderkid Fabio Silva, but given that he would come cheaper than Milik and has a proven record, he could be the option Spurs fall back on.

ALL OR NOTHING After Tottenham's doc, what next? 15 more of the best football films and documentaries to watch on Amazon Prime

Tottenham were linked with the likes of Callum Wilson and Ollie Watkins earlier in the transfer window but decided not to pursue either, with Newcastle United and Aston Villa sealing both deals respectively. Spurs have also been linked with Wilson's former teammate Joshua King - who remains a target for Villa - though he's holding out for a move to Man United after a potential transfer to Old Trafford collapsed back in January.

It's thought that aside from a striker, Spurs could be finished in the market for their business this summer. Tanguy Ndombele looks set to stay, despite interest from across the continent, while links to a new left-back - including Real Madrid's Sergio Reguilon - don't look to be anything concrete.