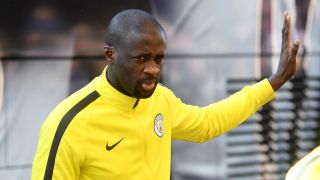 Manchester City must overcome fatigue by channelling the mentality of teams like Real Madrid and Barcelona ahead of their FA Cup quarter-final away to Middlesbrough, according to Yaya Toure.

City will have had just two days to recover and prepare for the tie at the Riverside Stadium on Saturday, having been held to a frustrating 0-0 draw at home to Stoke City in the Premier League on Wednesday.

It remains to be seen which combination of players head coach Pep Guardiola will entrust with the task of trying to guide City into the last four, but former Barca midfielder Toure knows what it takes to compete in multiple competitions at the sharp end of the season.

Discussing the readiness of fringe players to step into the first team when called upon, as well as the capacity of others to shake off niggles and tiredness, he told reporters: "It's very important but I think everyone in the team is involved now.

"It's not about fatigue, it's about mentality.

"Teams like Real Madrid or Barcelona always play a lot of games, because they're involved in all the trophies.

"You've got to be ready - that's our job. If you're the manager [and] if you've got to put the same team out on Saturday, then we have to do our job for the fans and the club."

After the meeting with Boro, City face the crucial second leg of their Champions League round-of-16 tie away to Monaco next Wednesday.

City hold a 5-3 aggregate lead from a thrilling first encounter with the Ligue 1 leaders, and Toure - who played for Monaco in the 2006-07 season - is hoping to return to Stade Louis II with a spot in an FA Cup semi-final at Wembley already secured.

"We've got two games now where we need all the players," he said.

"We have to try to do the business, Middlesbrough is going to be a tough, tough game.

"They've had a rest for a week. We'll try to do our best and of course one trophy would be very welcome for us.

"It's about winning on Saturday and then after that we have to play the semi-final [at Wembley].

"It's an unbelievable stadium, I love going there, and I hope we're going to do the business."