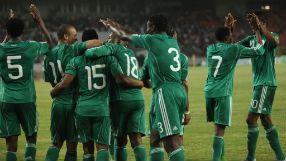 Utaka got a rare chance in Nigeria's starting line-up because of injuries to Obafemi Martins and Peter Odemwingie, and he wasted little time in taking advantage.

The younger brother of Montpellier's John Utaka opened the scoring after a minute following good work by Victor Anichebe.

He rounded Ethiopia's keeper to add a second in the 55th minute as Nigeria moved to within a point of Group B leaders Guinea at the halfway stage of the 2012 qualifiers.

Utaka then made way for injury-plagued Uche, who missed last year's World Cup because of a knee injury.

Uche took just seven minutes to mark his return with a goal from close range.

Odemwingie, who had been ruled out on Friday, came on as a second-half substitute and set up Uche's first goal, but a hamstring injury kept Martins from playing.

Uche made it 4-0 with a long-range effort in the final minute.