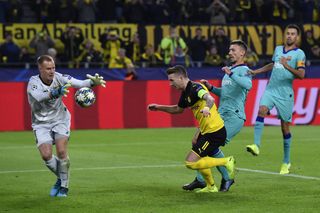 Barcelona coach Ernesto Valverde admitted his side were indebted to the heroics of goalkeeper Marc-Andre Ter Stegen after ‘suffering’ in the goalless Champions League opener at Borussia Dortmund.

The German had already been called upon once too often before making a remarkable double save following a penalty from Marco Reus, albeit appearing to be well off his line.

Dortmund also hit the crossbar through substitute Julian Brandt and on another night could easily have been on the end of a defeat from their opening Group F fixture.

Valverde gave 16-year-old Ansu Fati a first Champions League start, while Lionel Messi was brought on for the closing stages having recovered from a calf problem which had prevented him from playing so far this season.

Defender Jordi Alba, meanwhile, was forced off late in the first half with a suspected thigh injury.

Barcelona will next host Inter Milan on October 2, when the outlook could be more positive following what has been a testing start to the new campaign, with just two wins so far.

“It was a difficult game in a great atmosphere. We had to suffer a lot, especially after the break when we lost control and they were very dangerous,” said Valverde.

“We seemed dominant, but then we had three or four loose balls picked off us and Dortmund counter-attacked with their traditional speed, which they are very good at.

“Dortmund made it complicated for us, but fortunately Marc has been very good. We have to thank Marc for his outstanding saves. We have a great goalkeeper and we benefit from that.”

Valverde added at a press conference: “We suffered here, I have to admit – but we knew we would need to.”

👀 Look who's back for Barcelona…#UCLpic.twitter.com/PuCDgIWjdy— UEFA Champions League (@ChampionsLeague) September 17, 2019

Messi had little opportunity to make an impact on the final outcome, seeing his only real opportunity blocked deep into stoppage time.

Valverde admitted it would be a while before the Argentina playmaker was up to full speed again.

“He is like any player who has not done the pre-season. He has had to play a game at an incredible pace, which had already started – and he has done it just without preparation,” the Barcelona coach added.

Dortmund coach Lucien Favre, meanwhile, was left to reflect on an opportunity missed as his side failed to make their opportunities count.

“We played a very good second half with a lot more possession and patience and we had enough chances,” Favre said.

“We pressed better and with a higher line, so we can take a lot from that second half.

Dortmund captain Reus also wanted the squad to build on their performance.

“I failed to convert a penalty, and of course it does not feel good, but we had several other chances and one goal probably would have been enough for a win,” he said.

“We hardly allowed Barcelona space and showed a strong performance.

“Everything is open after the first match and in the coming games, we now have to repeat what we have shown.”