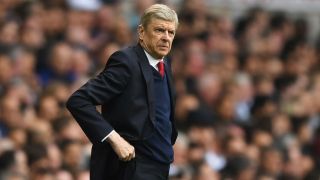 Arsene Wenger's future at Arsenal appears likely to be settled at a board meeting after the FA Cup final, although the veteran manager tried to remain typically evasive on the issue.

Wenger is out of contract at the end of this season and has persistently batted away enquiries over his future.

Arsenal have won six of their past seven Premier League matches but will miss out on Champions League football unless they are able to better Liverpool's result against Middlesbrough when they host Everton on Sunday.

It would be the first time the Gunners have finished outside the top four under Wenger's tenure, which began in 1996, and fan protests against his reign have continued despite the recent upturn.

Asked at a pre-match news conference whether this weekend would mark his final game in charge at Emirates Stadium, he said: "Of the season, yes."

Pressed on whether it would be his last game ever in north London he replied: "I cannot tell you that.

"I think what is most important for us is to win the football game that we play on Sunday.

"After that, what happen to me is less important. I'm here to serve the club and the best way to do it is to win the next game."

Best way to win ? “By keeping the quality of our game very high, by putting offensive pressure on them, by maintaining our run” May 19, 2017

Questioning then turned towards Arsenal's post-season board meeting

"I think it's after the FA Cup," Wenger said, before answering in the affirmative that "things would be finalised".

When the topic was brought up again and it was put to the 67-year-old that his future would be decided at the board meeting, he replied: "I didn't say that. You interpreted it like that. I don't know [how you should interpret it].

"I have been asked if there is a board meeting before the cup final and I said 'after'.

"Of course I will be there and at the moment we should focus on the short term and what's going on this Sunday and in the cup final.

"I don't know [what will happen at the meeting]. There are many aspects of the football club that have to be discussed at a board meeting.

"One is, of course, what is happening with the manager, the future, the players to come in and things like that."

Addressing whether there would be an announcement a few days after the meeting, Wenger added: "Yeah, of course."