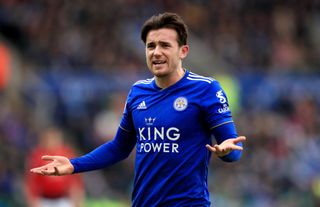 After being sent packing by the bosses at Borussia Dortmund, who continue to insist England winger Jadon Sancho is not leaving this summer, it appears Manchester United now want to hurl their giant suitcase of cash at Leicester City in exchange for Ben Chilwell instead.

According to reports, United will rival Chelsea for the Leicester left-back, and are willing to pay his £80m asking price. If true, it's an astronomical fee, and one that doesn’t really make sense from a United perspective.

At this stage, it’s worth mentioning Chilwell is a fantastic left-back and would definitely improve United’s defence. The 23-year old just enjoyed another excellent season with the Foxes, helping the club qualify for the Europa League, and is now England’s first choice left-back.

Chilwell is defensively disciplined, has pace to burn and got more Premier League assists than Manchester United’s current two left-backs combined last season. Having said that, there are a couple of reasons, beyond the sheer cost, United should abandon any talk of a move for him.

The first is that centre-back, if anything, appears to be more a concern for Solskjaer's rearguard. Harry Maguire, Victor Lindelof and Eric Bailly are all very good centre-backs, but lack pace, tackling ability and concentration respectively. Surely, an upgrade in that area would have a larger impact on team performance, as Virgil Van Dijk had at Liverpool for a similar price.

The second is Brandon Williams. The 19-year old has enjoyed a breakthrough campaign at Manchester United this season, making 17 Premier League appearances and 18 in the cup competitions. He’s impressed, with his ability on the ball and willingness to get forward giving United a quality option when in possession.

Williams has been so solid, in fact, he’s arguably now United’s first choice left-back, with Luke Shaw often deployed as one of three centre-backs when available. Despite enjoying a bit of a cult hero status at Old Trafford, many United fans wouldn’t be devastated were Shaw to be moved on over the next couple of windows.

It’s not that Shaw has been bad, but there is a case to be made that he's underperformed since signing from Southampton for £30m six years ago. Aged 19, Shaw was considered one of the most exciting young talents in the country; the long-term replacement for Ashley Cole at left-back for England. A mixture of injuries, fitness problems and poor management clipped his wings, however.

Brandon Williams has a chance to do what Shaw couldn’t: develop into a top-class defender at Old Trafford in an environment that nurtures and encourages young players. He won’t have the book thrown at him publicly following performance and fitness issues, as Shaw had under Mourinho, and isn’t part of the bloated, underachieving squad Shaw was under Van Gaal.

Williams has much to improve on. He’s not disciplined enough yet, lacks aerial presence and commits too many fouls, but those things come with experience and can be coached into him. That process will be slowed down considerably if he’s forced to compete with Chilwell for a place in the team.

These days, there are myriad reasons to run a world-class academy. Chelsea have made good money off developing and selling young players in the past, and now under Lampard have begun to realise the academy's potential from a squad-building perspective. Tottenham have also saved tens of millions in transfer fees by developing Harry Kane instead of gambling on ready-made strikers.

United know this better than anyone, with home-grown forwards Marcus Rashford and Mason Greenwood two of their standout players this season. They have a chance to repeat the trick at left-back in Brandon Williams, but it won’t happen if they throw money at Chilwell.