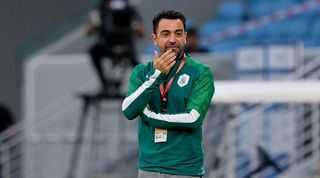 Barcelona legend Xavi Hernandez says he would be comfortable managing his former team-mates if he was appointed head coach at the Camp Nou.

The former midfielder left the Blaugrana for Qatari outfit Al Sadd in 2015, before hanging up his boots earlier this year.

Xavi immediately moved into the dugout with Al Sadd and is regularly spoken of as a future Barcelona manager.

The former Athletic Club coach was backed by Barcelona's board in the summer, but he has now come in for further criticism following Saturday’s shock 2-0 loss to Granada in La Liga.

And Xavi believes his inside knowledge of the club and its squad would help him be successful if he were offered the job in the future.

“I don’t know if it [the Al Sadd job] will be a bridge to Barça,” he told Ara. “The only thing that worries me now is doing well here, winning titles and making mistakes in some aspects to learn for the future.

“It wouldn’t be a problem [to manage former team-mates]. I know what Leo is like, and Luis [Suarez], [Sergio] Busquets, Jordi [Alba], [Gerard] Pique or Sergi [Roberto].

“I know how they train, their capacity for leadership, I can tell if they are sad or angry. I hope as a coach I could have three, five, eight or 10 players that I already knew and that I already had a good relationship with.

“[Lionel Messi] is a player who, if you convince him, he can even be a brilliant defender. He has physical and mental speed. He has everything. If you convince him to run, what will the others do? They will run twice as much.”

Barcelona return to La Liga action when they host Villarreal on Tuesday.