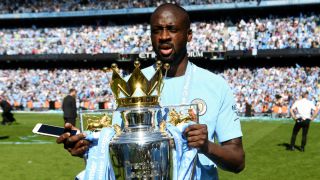 Yaya Toure has confirmed he intends to play on, perhaps in the Premier League, despite making only five appearances in a short spell for Olympiacos.

Toure left the Greek giants in December after starting a single league game during his three months at the club.

Former Manchester City midfielder Toure, though, has no intention of hanging up his boots at the age of 35.

"This is definitely not the end, I want to continue to play," Toure told Sky Sports.

"I went to Olympiacos and I quit because I was not so happy, the mentality was very different. It was a bad choice.

"Maybe it was an emotional choice because I started there and wanted to give something back to the fans.

"I'm well known in the world and wanted to give something back, but when I got there it was not what I was expecting."

To the Olympiacos fans

West Ham were previously linked with Toure, although Manuel Pellegrini played down the chances of a reunion.

However, the former Ivory Coast international sees his future in English football, having won three Premier League titles at City.

"You never know, maybe the Premier League!" Toure said when asked where he wants to play next. "If it is possible I want to play one or two more years, we will see.

"With the new competition and the new mentality of the guys coming up I think a player could go on to 42 years old, but we will see."