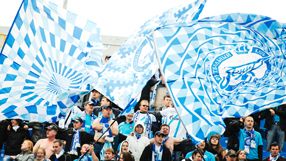 Far from setting Europa alight, Zenit and Spartak find themselves in the company of Galatasaray, Lille, Nordsjaelland, Ajax, Olympiakos and Dinamo Zagreb who have also failed to get off the mark in their opening two group stage games.

The situation is particularly embarrassing for Russian champions Zenit, who splurged around 100 million euros to lure Brazilian forward Hulk and Belgium's Alex Witsel to the club.

This week's third round of matches, where Real Madrid's visit to Borussia Dortmund is the highlight, is also potentially decisive for the hopes of Manchester City, Juventus and Benfica, who have yet to win a game between them.

Real are among six teams to have won their opening games alongside Barcelona, Porto, Arsenal and Manchester United plus, more surprisingly, BATE Borisov and newcomers Malaga.

But, while CSKA Moscow and Zenit have recently won the UEFA Cup, since rebranded Europa League, the spending spree has yet to translate into results in the continent's flagship competition.

The last Russian side to reach the semi-finals were Spartak Moscow in 1991, in the days of the old European Cup, and the country has mustered only four quarter-final appearances since the Champions League started in 1992, two apiece for Spartak and CSKA.

Zenit will finally hope to get off the mark against Belgian champions Anderlecht, who have one point, in Group C on Wednesday, where Malaga (6) and Milan (4), who meet in Spain, are already looking the likely qualifiers despite the Serie A side's domestic troubles.

"It's not a good moment, but we have to stay lucid and maintain balance," said Milan coach Massimiliano Allegri after his side lost 3-2 at Lazio on Saturday.

"I think that lately, the team has put in some good performances but has also paid a high price for the mistakes we made."

Ueni Emery's side, who led 2-1 against both Barcelona and Celtic before slumping to defeat, have a very poor home record in the Champions League group stage, with only one win in their last 15 attempts.

Spartak, beaten 2-1 by Russian Premier League leaders Anzhi at the weekend, could be down to only one goalkeeper, third-choice Artem Rebrov after Sergei Pesyakov was injured at the weekend with a suspected broken foot.

First-choice keeper Andriy Dykan is sidelined with a shoulder injury.

If leaders Barcelona (6) beat Celtic (4) as expected in the group's other game, a Spartak win could lift them back into contention.

Elsewhere, Manchester City and Juventus badly need to get their campaigns off the ground.

Serie A champions Juventus, unbeaten in 10