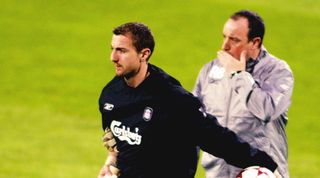 Jerzy Dudek has revealed how he was once so angry with manager Rafael Benitez, that he nearly punched the Spaniard.

Dudek was the penalty shootout hero for Liverpool against AC Milan in the 2005 Champions League final, but speaking in the Summer issue of FourFourTwo, out now, the Pole revealed how he nearly took drastic measures to leave the club when his boss signed Pepe Reina as his competition.

"Pepe was a great guy, but Rafa had signed a new goalkeeper at a moment when I felt like I was at the peak of my career," Dudek told FFT. "I told Rafa that the World Cup was on the horizon and I needed to be playing football. Köln were interested, but a few days before the window closed, they called and said, ‘Why is Rafa not even talking to us?’ I was surprised – I thought everything had been agreed."

"Then I had this crazy thought – ‘I think I’ll just punch him in the face’. This evil whisper in my head was telling me that if I hit Rafa, they’d let me go to Köln."

Eventually, Dudek got his chance in the Reds' side. Pepe Reina was sent off against Chelsea, giving the Polish keeper a run that included quite a few big games. Dudek left Anfield after six years to join Real Madrid in 2007 and says that he is still a huge fan of the club.

"Looking back today, I appreciate even more that I played for a club with the history of Liverpool," he said. "Last year, I went to Madrid with my son and watched Liverpool win the Champions League again."

"As a player, I never understood why supporters cried after big wins – but when I saw the players running around with the cup in their hands, I had tears in my eyes."

"I understood even more about the love I still get from Reds fans."

Read the full interview with Jerzy Dudek in the Summer 2020 issue of FourFourTwo magazine, available in shops and online from now. Our new magazine looks at the 99 things you’ve forgotten about the noughties, from battles to beach balls, looking at the decade that revolutionised the game as we know it; we examine the golden generation and where it went wrong for England, look over the extraordinary decade of Thierry Henry, remember the fall of ITV Digital, the highs and lows of Harchester United - the fictional side from Sky’s popular drama Dream Team - and look at the formidable partnership of Kaka and Andriy Shevencko over in Milan. We also chat to Mikael Silvestre, Alan Stubbs, Fredi Kanoute and Jimmy Floyd Hasselbaink.