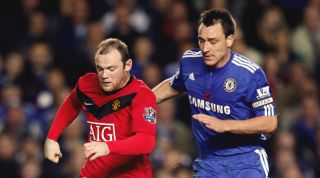 From the ashes of the 1990s came the noughties: the decade that changed everything for football.

Some may call it the golden age of the Premier League. The calibre of footballer plying their trade on our shores increased exponentially: legends of the game were no longer confined simply to Old Trafford, as even the likes of Bolton Wanderers and Portsmouth brought cult heroes to their squads. English sides triumphed in the Champions League; they pushed pretty hard in the Europa League too.

But what does the noughties Premier League table look like... in full?

The latest issue of FourFourTwo celebrates the noughties in all its glory: the best of the best and everything in between that you probably forgot in all the years since.

You can buy the mag now to check out the full list.

Some classic noughties sides miss out on the top 20: we're talking Paul Jewell's plucky Wigan Athletic, the early noughties Ipswich Town side that got into Europe and the West Bromwich Albion team that stayed up on the final day of the 2004-05 season, despite being bottom at Christmas.

Derby County's dismal 11-point season no doubt didn't help them in their final noughties tally. And spare a thought for Leicester City: relegated in 2004, and the last team that Arsenal beat to win the title, unbeaten. Who'd have thought back then that the Foxes would actually win the Premier League before Arsenal lifted it again?

Given their yo-yo status in the 2000s, it's perhaps no surprise to see Birmingham City bottom in the top 20.

Also unsurprising is seeing Sunderland here. The Black Cats hit the heady heights of seventh in the league in 1999-2000, followed by another campaign where they reached seventh, spearheaded in both by Kevin Phillips - who won the Golden Boot in 2000 with a whopping 30 league goals. Twice though in the noughties, the club broke the record for the lowest-ever points tally - hence their 19th spot, here.

Were the noughties one long season, Southampton would have been relegated - only just - by local rivals, Portsmouth. Just as they were in 2004-05, when Pompey lost to West Brom on the last day of the season to seal Saints' doom.

Ahh, Manchester City, that lower-midtable Premier League side. Whatever happened to them?

City actually spent the same number of seasons in the Prem during the noughties as Charlton Athletic, who were common midtable fodder under Alan Curbishley. Elsewhere is the aforementioned rise and plummet of Portsmouth, and Leeds United, who famously were playing Champions League football at the start of the decade, before relegation just four seasons later.

It's incredible to think now, but all four of these clubs got into Europe during the noughties.

West Ham United were Premier League members for all but one season, reaching a record 42 points in the year they got relegated. Bolton famously flew up the table under Sam Allardyce, creating one of the most nostalgic sides the league ever witnessed, before an end-of-decade slide back down.

Along with the Wanderers, Fulham and Blackburn Rovers were promoted in 2001 and managed to see out the decade in the top flight. Four points separate them here.

Perhaps Newcastle United would be a little higher in the noughties table, had Mike Ashley never bought the club.

The start of the decade saw the Toon Army chasing Manchester United and Arsenal at the top of the table. They enjoyed some form of European football – yes, the Intertoto Cup counts – from 2001 to 2007, but when Ashley took over the club, that soon dried up.

Middlesbrough were altogether steadier, less spectacular and generally lower in the table than their north-eastern rivals over the noughties. Both clubs were relegated in 2009.

Looking at where each club is now, it's fascinating that nine points separated Tottenham Hotspur, Aston Villa and Everton during the noughties.

Tottenham are level on points with Newcastle in our table, but beat them for goal difference. They did the opposite of the Magpies though, replacing early-decade mediocrity with a couple of European runs in the late 2000s. Three points ahead are Villa, who similarly were a reliable bet to finish in a UEFA Cup spot on any given season.

Fifth place in the noughties table is perhaps unsurprisingly all Everton's, and David Moyes's, who managed them from 2002 onwards. This is really where the Toffees carved out their niche for being the biggest club outside the top cabal, finishing fourth in 2005, then fifth in 2008 and 2009. It's a tradition that followed into the 2010s, with Everton the club most expected to finish highest outside the top six.

It's two European trophies, two FA Cups and two League Cups in the 2000s for Liverpool. They're the Netherlands of the noughties: easily the best team not have won the Premier League that decade.

The Reds are fourth in our table with 710 points overall. The top four all won over 200 games during the era, and Liverpool never finished lower than fifth in the league.

Incredibly, Liverpool's worst Premier League season during that decade was in 2004/05, the year they were crowned champions of Europe for a fifth time.

The 2000s was the decade of the billionaire owner: famously, Arsenal vice-chairman David Dein made reference to Roman Abramovich parking his tank on Arsenal's lawn in 2005.

Well, despite the United/Arsenal duopoly that fuelled Arsene Wenger's early Premier League career, Arsenal are officially the third-best team of the 2000s. Not by much though: the Gunners finished in the top four every season, lifted the title twice and only twice recorded fewer than 70 points in a season.

In fact, Arsenal being the third-best side of the noughties, despite the austerity that gripped the club after moving from Highbury in 2006, is quite an achievement from Wenger. Things were to go much further south in the 10 years that followed.

At the start of the 2000s, Chelsea were an ambitious club, hovering around fifth in the table. By the end of the decade, they were a renowned global force and the envy of London. It's quite the feat.

Consecutive 90 point-plus seasons under Jose Mourinho certainly strengthen Chelsea in our 2000s table. The club never recorded fewer than 83 points in the noughties after the Special One first arrived but crucially, their pre-money record has helped them into second place. The Blues managed over 60 points every season from 2000 to 2004. Every little helps.

Chelsea also conceded the fewest goals of any Premier League side across the decade.

Six titles speak for themselves. 257 wins during the 2000s mean that United won two thirds of their matches; they lost fewer than 50 league games all decade and scored a whopping 771 goals across the ten years they ruled over the English game outright.

It's quite an astonishing record. Sir Alex Ferguson's side are the indisputable Premier League kings of the noughties statistically and they even managed two Champions League finals towards the end of the decade, winning in 2008.