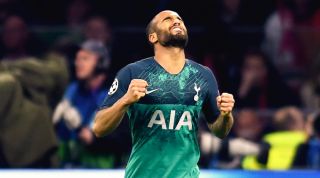 Five minutes on the clock, 28 answers to guess - that's 11 players on each side, plus three substitutes.

Only a handful of footballers in the history of L'Equipe's scoring system have ever managed to achieve the perfect 10/10 rating for a game.

Lionel Messi's done it. Dusan Tadic too. And this time last year, it was the turn of Lucas Moura for Tottenham, away in Amsterdam with a mountain to climb.

You know the story: Spurs were dead and buried at half-time, before the might Brazilian conjured a second-half hat-trick to send his side into the Champions League final. Mauricio Pochettino in tears; Spurs fans going wild. What a night.

Today, we'd like you to name everyone else on the pitch that night - aside from the master architect himself. Just don't mention what happened in Madrid a few weeks later...