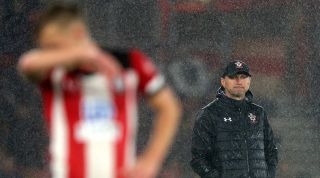 Often perceived as the darkest day in African football history, Zaire’s shambolic performance at the 1974 World Cup was personified by this thrashing from Yugoslavia that even broke the scoreboard.

Their tournament hadn’t started particularly disastrously, with a 2-0 loss against Scotland in a hard-fought opener, but inexperience on the world stage was exploited in their second match.

Fingers were pointed at Zaire’s Yugoslavian coach Blagoje Vidinic, who had inexplicably dropped star striker Mayanga Maku and made bizarre substitutions throughout the game. The true source of the dismal display seems to have developed from the promise of bonuses – a problem that would blight African teams in future tournaments.

"We had the erroneous belief that we'd be returning from the World Cup as millionaires," defender Mwepu Ilunga told BBC Sport in 2002. "But we got back home without a penny in our pockets."

Before the tournament, Zaire president Mobutu Sese Seko had bought each member of the squad a car – but things turned sour after the heavy loss. "He sent his presidential guards to threaten us," Ilunga continued. "They closed the hotel to all journalists and said that if we lost 4-0 to Brazil, none of us would be able to return home."

Incredibly, they only lost 3-0 and returned home. Now known as the Democratic Republic of Congo, they have never been back to the World Cup since.

On the final day of the 1977/78 Bundesliga season, Borussia Monchengladbach had the chance to win the title if they could beat Cologne’s +10 goal difference.

Astonishingly they managed to score 12 times, but Cologne won the title anyway having scored five past St Pauli. For Dortmund, the repercussions were far more significant – Otto Rehhagel was immediately sacked, goalkeeper Peter Endrulat was sold and all of the players were fined between 2000 and 2,500 Deutsche Mark.

Allegations of match-fixing were investigated and eventually thrown out, but the humiliation lingered and the scoreline is still a German record to this day.

At the 1982 World Cup in Spain, El Salvador were the undisputed weaklings – and their opening match couldn’t have been much more of a disaster.

However, the most memorable moment of the game came when their striker Luis Ramirez Zapata scored a consolation on 64 minutes and launched into fervent celebration. It became an iconic moment of the tournament, and El Salvador respectfully held their own against Belgium (0-1) and Argentina (0-2) in their remaining group games.

The match has become something of a legend in Salvadoran culture, and in 2007 the country's FA marked the 20th anniversary of the result with a friendly against Hungary. This time the score finished a much more even 2-2.

After three consecutive seasons in the top flight, Ipswich had continuously flirted with relegation and only avoided the drop by a point the previous campaign. Their fate was eventual sealed in 1994/95, however, with this dismal display at Old Trafford contributing to the Tractor Boys' downfall.

Amazingly, the Suffolk side had beaten United 3-2 at Portman Road earlier in the season, but the then-champions were out for revenge in this game as Andy Cole bagged five of the nine goals in this record Premier League victory. Ipswich finished bottom of the league, while poor goalkeeper Craig Forrest went on to concede seven more goals at Old Trafford in a West Ham shirt five years later.

After seven games of the 1999/2000 campaign, neither of these sides had won and propped up the rest at the bottom of the table. Sheffield Wednesday, therefore, went to St James' Park in the hope of getting off the mark against the team they finished one place above the season before.

But it wasn't to be – or anything close to it. Newcastle were 4-0 up by the break thanks to Alan Shearer's first-half hat-trick, and added another four in the second half as the Geordie favourite took his personal tally to five.

It proved an omen: the Owls endured a lifeless season of struggle and were relegated alongside Watford and Wimbledon. They recorded a 4-0 win over Leicester on the final day, but haven't been seen in the Premier League since.

The tiny Pacific nation were clear whipping boys heading into their 2002 World Cup qualifier, but even this scoreline perhaps wasn't surprising for the Socceroos – Frank Farina's side had already beaten Tonga 22-0, while American Samoa had lost 13-0 to Fiji and 8-0 to Samoa.

Unsurprisingly, the result cemented American Samoa’s position at the foot of FIFA's rankings, while Australia questioned the qualifying format and were later entered into Asia's section for the 2010 World Cup.

But American Samoa's tale had a happy ending. After years of hard work, they won their first ever official match in 2011 by beating Tonga 2-1. They are now ranked 190th in the world and their remarkable story was told in the excellent, uplifting 2014 documentary Next Goal Wins.

"I would love to show Australia that we’re not the team that was beaten 13 years ago," said Salapu, who now lives in Seattle. "I want to show them I’m a different person, I’m up for the challenge. Anytime, anywhere, I’ll be ready no matter what."

SEE ALSO The 15 best football documentaries you need to watch

This bizarre game occurred in Madagascar on October 31, 2002, and needless to say it proved a horror show for the officials. This wasn't so much a match, but an utter farce.

It was part of a four-team round-robin tournament that SOE had been knocked out of thanks to a debatable penalty in their previous game. With no chance of winning anything, they continued to score own goal after own goal, with opponents AS Adema and spectators utterly bemused.

SOE were punished after the clash, with coach Zaka Be banned for three years and four of his players suspended until the end of the season.

Amazingly, the match wasn’t thrown out and the result stands to this day as the highest score ever recorded (it's in Guinness and everything). Perhaps fighting the power wasn’t the greatest idea SOE ever had.

Manchester City’s new revolution under Sven-Goran Eriksson hadn’t gone quite to plan – yet although the team had fallen into mid-table mediocrity, nobody could have foreseen their final-day demolition.

Richard Dunne was dismissed after 15 minutes and chaos ensued as Gareth Southgate’s men showed their ruthlessness in front of goal. Afonso Alves hit a hat-trick and Stewart Downing bagged two, while Adam Johnson, Fabio Rochemback and Jeremie Aliadiere made up the numbers. Elano's terrific 87th-minute strike was a mere consolation.

The game proved to be Sven’s final game as Manchester City boss; Mark Hughes arrived to kick-start the new era we know today, bringing with him the likes of Vincent Kompany, Pablo Zabaleta, Robinho and... er, Tal Ben Haim. Middlesbrough were relegated two seasons later and only returned to the top flight in 2016.

Perhaps the most startling fact about Spurs’ emphatic victory over Wigan in November 2009 is that it was only 1-0 at half-time.

Tottenham were ruthless in a devastating second half, with Jermain Defoe helping himself to five goals across 36 bonkers minutes. Wigan were particularly leaky that season, and had already been on the receiving end of hidings from Manchester United (5-0), Arsenal (4-0) and Portsmouth (4-0).

They would go on to receive another battering from United (5-0 again), plus an ugly 8-0 loss to Chelsea on the last day of the season – yet still finished 16th and avoided the drop by six points.

FEATURE What’s it like to be a big-money flop? Five players who've been there tell FourFourTwo...

Feyenoord’s 2010/11 season had not started well. Before they faced PSV, the Stadionclub had won just twice in their first nine games of the season – and their 10th would prove utterly humiliating.

Things began badly when midfielder Kelvin Leerdam was sent off after 34 minutes, but the Rotterdam club were only 2-0 down at half-time.

Like Spurs, though, PSV were relentless in the second half. They scored five times within 17 minutes of the restart against a side featuring future Netherlands internationals Stefan de Vrij, Bruno Martins Indi, Leroy Fer and Georginio Wijnaldum.

Feyenoord finished 10th in a dismal season, but the experience clearly proved a valuable one for their aforementioned youngsters, none of whom remain at De Kuip.