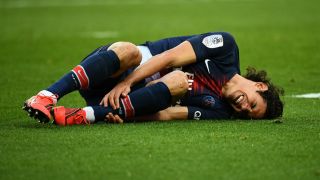 The striker scored from the penalty spot in Saturday's 1-0 Ligue 1 win over Bordeaux but was unable to appear for the second half after sustaining what is reported to be a thigh problem.

The Uruguay international is undergoing tests on Sunday to determine whether or not he will be ready for the Champions League last-16 trip to Old Trafford.

Tuchel, though, is not optimistic.

"There's no good news for Edi this morning. He had some tests and there will be more to come," he told Telefoot.

#PSGFCGB Marco Verratti: "I feel good. I'm really happy, it's been three weeks since I last played. I worked hard to get back as soon as possible."

"My feeling is that it's going to be very difficult for him to play. We have to wait a little bit more, but the club will communicate on this later today. I think the news will not be very good.

"[There is a] very small hope, but the first tests were not good."

Marco Verratti is also a doubt, the midfielder managing only 59 minutes against Bordeaux after recovering from an ankle injury.

However, Tuchel says the Italy international is eager to play a part.

"Marco Verratti wants to play but he only played 60 minutes once," he said. "We have to think it over with the physio, the doctor and Marco. He can play and he will play."