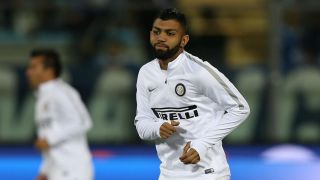 Gabriel Barbosa feels Inter are Italy's biggest club and says he turned down offers from a number of other sides to join them.

The Brazil international was also heavily linked with moves to Barcelona and Juventus, while there was interest from China, too.

Nevertheless, Inter's overall project convinced the 20-year-old to make the move to Milan instead.

"I'm very happy to be part of the history of this club. The whole project at Inter convinced me, from the coaches to the players. This is the biggest club of Italy," Gabriel told reporters.

"I turned down a big offer from China in favour of Inter. Other clubs wanted me as well, but the fans' affection made the difference for me. I'm here to help them win.

"Everyone has been so kind to me. I can't wait to play with my new team-mates. I want to give my contribution. I feel in good shape and I'm available for selection for this weekend's match against Bologna.

"It was an intense summer but Inter gave me time to rest and ease myself into the squad. I want to help my team-mates and I can't wait to start.

"My position isn't important, helping the team is. The treble-winning Inter gave everything in games. That's what I want to do. We have great players here."

Gabriel made the bench for Inter's 2-0 win over Empoli on Wednesday, but Frank de Boer opted against bringing on the former Santos forward for his debut.