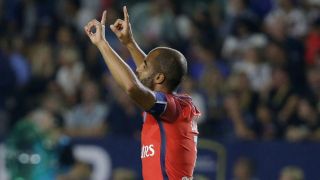 Paris Saint-Germain kept their faint hopes of a fifth consecutive Ligue 1 title alive with a 5-0 win over bottom club Bastia.

Lucas Moura and Marco Verratti were on target within the space of three minutes after the half hour, although the Italy midfielder's long-range effort arrived in controversial circumstances.

Bastia goalkeeper Jean-Louis Leca had been tending to the injured PSG midfielder Blaise Matuidi and appeared to be obstructed by an offside Julian Draxler when Verratti let fly to effectively end the game as a contest.

Edinson Cavani had two goals chalked off, and scored two either side of  seeing a penalty saved that he won in a personally eventful second half.

Marquinhos netted in between Cavani's efforts and Unai Emery's men drew level on points with Monaco ahead of the leaders' trip to Nancy later on Saturday. Leonardo Jardim's side boast a further game in hand.

Nancy are a point and a place above Bastia in 19th and there were only three points separating the basement boys and 16th-place Lorient before the day's later games got underway.

Lucas embarked upon a driving run towards a backpedalling Bastia defence and unleashed a rising effort from 25 yards that clipped the top of the post with Leca a spectator.

His 10th Ligue 1 goal of the season arrived in more routine fashion after 32 minutes as Draxler played Matuidi into the box to slot a pass across the face of goal for Lucas to tap in, but controversy reigned as PSG swiftly doubled their advantage.

The hosts had strong penalty shouts rejected when Abdelhamid El Kaoutari untidily challenged Matuidi. They scrambled the ball clear but the France midfielder stayed down inside the six-yard box.

As PSG took the subsequent throw-in, Leca tended to the prone Matuidi and returned to his goal just as Verratti rattled a brilliant, if opportunistic, strike into his top left corner.

Draxler was standing in front of the keeper in an offside position for good measure but the goal stood.

Leca protested extensively to referee Francois Letexier and smashed the ball away in frustration to earn a booking but regained his composure enough to twice deny Verratti at close quarters before the interval.

Cavani twice thought he had his 46th goal of the season in all competitions but was correctly flagged offside when he converted Draxler's clever flick from Matuidi's cross, while the latter handled to set up the Uruguayan for a 72st-minute finish.

After those false alarms, Cavani did make it 32 in Ligue 1 this term – Draxler and substitute Goncalo Guedes combining to create a tap-in.

He should have scored again having been unceremoniously hacked down by Alexander Djiku but Leca plunged right to save the penalty.

Leca could not bask in the acclaim for long as PSG's forgotten man Giovani Lo Celso skipped into the area and chipped delicately across goal for Marquinhos to finish.

January signing Lo Celso then rattled the bar with a venomous strike, hinting towards greater involvement next season on his second Ligue 1 appearance since joining from Rosario, while Cavani streamed clear of a flagging defence to emphatically have the final word a minute from time.