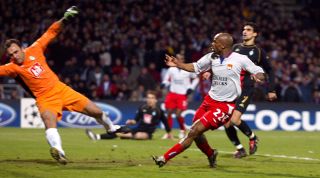 Who was the first Englishman to score a Champions League hat-trick? Alan Shearer? Andy Cole? Michael Owen? No, it was Mike Newell. Of course it was.

The Liverpudlian striker, who was very much behind Shearer and Chris Sutton in the pecking order at Ewood Park, bagged all three goals for Blackburn against Rosenborg in the space of nine minutes – largely due to the Norwegian club's inept defending.

Newell's lightning quick trio of strikes stood as the fastest Champions League hat-trick until former Swansea man Bafetimbi Gomis bettered it for Lyon against Dynamo Zagreb in 2011. This match was the last game in a group Rovers actually finished bottom of, so the victory and the achievement were somewhat tainted.

Back in the late '90s, Otto Rehhagel injected a new lease of life into Kaiserslautern as the team unexpectedly won the Bundesliga title only a year after earning promotion. They weren't quite as successful in the Champions League, but their best result was this 5-2 thrashing of HJK Helsinki in December 1998.

Current Fleetwood manager and Manchester City hero Uwe Rosler was the man who put the Finns to the sword with three bullet headers. Rosler, whose team-mates included a young Michael Ballack, couldn't do much in the next round: they succumbed to their fellow Germans, Bayern Munich, 6-0 on aggregate.

PSG fans are probably sick to death of improbable European comebacks. Long before their 6-1 humbling at the Camp Nou, the French giants raced into a three-goal lead at the Riazor during a second group stage game spearheaded by none other than Jay-Jay Okocha.

Just before the hour mark, Depor decided that they'd best do something about the scoreline. Step up future Birmingham City man Walter Pandiani, who rose to the occasion by scoring three close-range headers, with Diego Tristan grabbing the other to complete the comeback. The Uruguayan striker's influence helped Deportivo to reach the quarter-finals, where they bowed out to a young and boisterous Leeds side.

Yakubu is one of modern football's enigmas. He was a skilful but sometimes awkward-looking player, who always scored goals but rarely stayed put for a prolonged period. His journeys have taken him from Nigeria to Israel, Qatar, China, Everton, Reading and Coventry.

Among all that is a Champions League hat-trick for Maccabi Haifa against Olympiakos, scored during the 2002/03 group stage. Later he would also score a penalty in a 3-0 win over Manchester United. Those performances caught the eye of Harry Redknapp, who signed The Yak for Portsmouth and duly helped the south-coast side earn promotion to the top flight.

The Yak attack begins with a penalty around 1.25...

Werder Bremen's mid-2000s squad was brimming with talent: Miroslav Klose, Nelson Valdez, Ailton and Johan Micoud all graced the Weserstadion during this time. Although he wasn't a superstar, Ivan Klasnic was a vital part of the team, scoring 13 goals during their 2003/04 Bundesliga-winning campaign.

He continued his goalscoring traits the following season in Europe, bagging five during the group stage, all of which came against sorry old Anderlecht – including a hat-trick in a 5-1 thrashing. Recent times haven't been as happy for the former Bolton man, who suffers from a debilitating kidney condition and is now awaiting his third transplant in 10 years. Get well soon, Ivan.

Having been blessed with great skill, pace and vision, Tuncay is a cult icon at Middlesbrough and an outright legend for Fenerbahce, where he won three Super Lig titles.

Arguably his finest individual performance for the Yellow Canaries was his hat-trick against Manchester United in 2005, kick-started by a spectacular acrobatic effort. The Turk blew away Alex Ferguson's men, who had already qualified for the knockout stage.

Still, let's not take anything away from Tuncay, who became only the second person to score three against United in said competition. The first, you ask? Original Ronaldo.

In a shocking last-16 tie that finished 10-2 on aggregate to Lyon, it was former Arsenal man Wiltord who dismantled Bremen, scoring four over the course of two legs.

Three of those came in a 7-2 thriller, with future Chelsea men Florent Malouda and Michael Essien also getting on the scoresheet for the Ligue 1 side. Wiltord, who netted just three goals in Europe for the Gunners, totalled six for Lyon in Europe that season, but could only help les Gones reach the quarter-finals where they lost to PSV Eindhoven.

An 8-0 drubbing of Besiktas, featuring a back-heeled goal from Ryan Babel, is exactly the place you'd expect to find an unlikely hat-trick. This time it was the turn of Benayoun, who mercilessly hammered home three goals against the woeful Turks.

Fun fact: Benayoun is the only player to have scored hat-tricks in the Champions League, Premier League and FA Cup, with the other trebles coming against Burnley and, erm, Havant and Waterlooville respectively.

Lord Bendtner often struggles to score at the best of times, so the last place you'd expect to see the frustrating Dane crop up is in a list of Champions League hat-tricks. But here he is.

None of his three goals in Arsenal's 5-0 win over Porto were anything special, but we doubt Bendtner cared as he helped the Gunners progress to the quarter-finals. Yes. Arsenal in the Champions League quarter-finals, where they haven’t been for seven years. Perhaps it’s time to let the Lord have another crack?

Bendtner’s fun begins about 30 seconds in...

'Kostas Mitroglou we hardly knew ya', is what most Fulham fans will say about the Greek striker’s brief tenure at Craven Cottage. He played only three times for the west London side after signing for a club record fee of around £12m in January 2014.

They had reason to expect a lot more from the player who'd plundered 62 goals in 149 games for Olympiakos, including this impressive hat-trick (one of four from that season) against Anderlecht. Thankfully for him he's found his shooting boots again at Benfica, where the Greek has scored 26 in 42 this term alone.