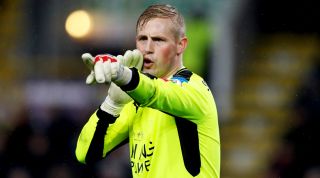 In a way, Zaha has been there and done it already – although he did only play an inglorious 28 minutes of league football for David Moyes’s Manchester United, who didn’t actually finish in the top six.

Now back at his boyhood club, Zaha has rediscovered the form that persuaded Sir Alex Ferguson to make him his final signing at Old Trafford. There aren't many Premier League wingers who can beat a full-back like the Ivory Coast international, who is skilful, a tricky dribbler and – crucially – runs really fast. He works hard, too, and has scored some cracking goals this term; his final ball, while improving, is still more David Batty than David Beckham, however.

Tottenham tried to sign Zaha in the summer but ended up splashing their cash on Moussa Sissoko instead. Given that they still need a quick winger, they're probably regretting that decision now.

The PFA Player of the Year is suffering from Hazarditis after his remarkable season last time out, but that doesn't mean he's finished (right, Eden?).

It's difficult to blame Mahrez for looking so uninterested as the champions hurtle towards the Championship. His better form in the Champions League – four goals in five group stage appearances – suggests he can still be effective when he wants to be, and there’s no starting XI in the top six that wouldn't be improved by last season's version of the Algerian.

Spurs are rumoured to have made a cheeky enquiry in January, but Mahrez has been most frequently linked to their north London rivals. Jamie Vardy said no to Arsenal last summer, but it's unlikely his Leicester team-mate would make the same call.

The defender with more league goals than Wayne Rooney and Daniel Sturridge is a fantasy football manager's dream, and he's been pretty useful to real-life boss Paul Clement too. His superb volley against Leicester last week was evidence of his technical ability, while he's also a commanding and vocal presence at the heart of Swansea's backline.

Adept with both feet and strong in both boxes, Mawson has hit the ground running since swapping League One for the top flight. It's still early days for the 23-year-old, but he certainly has the potential to follow another former Barnsley centre-back, John Stones, to the Premier League's upper echelons.

Two-and-a-half years on, Tottenham fans are suddenly indignant that Sigurdsson was ever allowed to leave the club, fuelled by Mauricio Pochettino's candid admission that it was a mistake to sell the "perfect" Icelander. "I think after he moved to Swansea and we saw his development, he was a perfect player for us," the Spurs manager said in December.

But he couldn't get in Tottenham’s team ahead of Gareth Bale and then Christian Eriksen, and there's little to suggest that would be any different now. Perhaps, then, he'd be better off staying put.

It feels like Peter Schmeichel's son will always be a fresh-faced 20-something, but Kasper actually turned 30 in November. He's still young in goalkeeper years, of course, which makes him an enticing prospect for the Premier League's top clubs.

Manchester City are in desperate need of a new goalkeeper, but the Dane – who inherited his father's big mouth and sharp reflexes – is more accustomed to playing long to Vardy than short to Stones. He's good enough with his feet to interest Jurgen Klopp, though, and he's certainly better than Liverpool's current crop of custodians.

Ask any Middlesbrough fan and they'll tell you every top striker in the Premier League has spent some time in Ben Gibson's pocket this season. The 23-year-old has been the main man in a mean back four and been tipped for full England honours soon, having played for the under-21s under ex-Boro boss Gareth Southgate.

Chairman Steve Gibson has reportedly slapped a whopping price tag on his nephew, but that won't necessarily deter Chelsea, Manchester City and the rest. The runaway league leaders have been linked with a big move for Gibson, who could prove a long-term successor to Gary Cahill for both club and country.

Still only 22, the local lad is being tipped as Joe Hart's long-term successor between the sticks for England. He could also replace him at Manchester City, who are now deploying Willy Caballero ahead of the disappointing Claudio Bravo.

While Pickford is a fine shot-stopper, quick off his line and boasts sensational kicking ability, it's not clear if he’s good enough at the old tiki-taka – Moyes doesn’t go in for that stuff – to interest Guardiola. Arsenal, in need of a long-term replacement for Petr Cech, would be a better fit.

Even when the Foxes were flying high in January 2016, it was hardly an obvious call when Gray opted for Leicester amid reported interest from Tottenham and others. In hindsight, though, the winger made the right choice: he now has a Premier League winner's medal in his possession, while he's probably received more game time this season than he would have done elsewhere.

If Leicester's dream does turn into a relegation-themed nightmare, Gray will surely jump ship. Spurs, Liverpool and Everton have all been linked, and the ex-Birmingham man's speed on the counter-attack would make him a great fit for Jurgen Klopp's side. Whether he'd be willing to accept a bit-part role is yet to be determined, though.

Photos of Maguire squaring up to Theo Walcott in Hull's recent defeat by Arsenal suggest he's an oversized ogre of a man. In fact, he's a fairly routine 6ft 2in centre-half – and a ruddy good one at that.

The 23-year-old was named Sheffield United's player of the year and in the League One team of the year for three consecutive seasons from 2011 and, after a slow start at Hull, he's now impressing in the top tier. Another upward move seems inevitable in the future.

There are still imperfections – particularly a tendency to dive in – which need to be ironed out, but Maguire's no-nonsense performance at Liverpool felt like a coming of age. The Reds are fond of signing players who have played well against them, but Manchester United's track record of purchasing young English defenders means Old Trafford is a more likely destination than Anfield.

Didier Ndong may have the worst hair at Sunderland – if not in the entire Premier League – but the 22-year-old is probably the best player at the Stadium of Light, too. The Gabon international is the Black Cats' record signing at £13.6m but, somewhat shockingly given their recent recruitment issues, he hasn't been a total disaster.

Playing between the boxes, he covers more ground than his team-mates and recycles the ball intelligently, while his fine strike against Crystal Palace was a demonstration of what he can do when given time and space.

His mysterious no-show for the hosts at the recent Africa Cup of Nations suggests an immaturity that may put off some watching managers, but a move up the table beckons as long as he continues to perform in the Premier League.