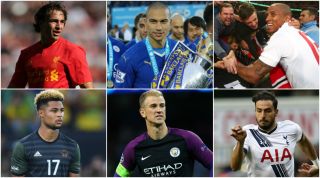 After five years at Manchester United, Young could be on his way out of Old Trafford in the coming days – Jose Mourinho is yet to use him in the Premier League this season. The ex-Aston Villa winger, who was deployed at full-back and up front by Louis van Gaal at various points last term, is now 31 and could be tempted by a transfer if it came with a guarantee of regular playing time. Crystal Palace were linked with Young a few weeks back and could yet renew their interest, while there are a host of other top-flight sides who would benefit from adding the former England international to their ranks.

England’s No.1 could become Manchester City’s No.3 if he opts to remain at the Etihad Stadium, with Barcelona’s Claudio Bravo set to join Willy Caballero in front of Hart in the pecking order. The 29-year-old’s distribution seems to be the sticking point with Pep Guardiola; given that the former Bayern Munich boss won’t be going anywhere for a while, Hart should consider his options elsewhere. Everton have reportedly withdrawn their interest but Sevilla continue to be linked, while other clubs from across Europe are likely to join the race for his signature before the end of the month.

The appointment of Antonio Conte at Stamford Bridge appeared to serve as a reprieve for Cuadrado, who was a perennial transfer target of the Italian’s during his time in charge of Juventus. Instead, the Colombian winger has supposedly been told he’s free to leave west London, with Serie A champions Juve keen to bring him back to Turin after a successful loan spell at the club last season.

It’s strange to think now that Balotelli was once one of the most promising young strikers on the continent. His £16m move to Liverpool two years ago was nothing short of a disaster, while the Italian also failed to impress for most of his season-long loan at boyhood club Milan in 2015/16. All of which has left Balotelli in limbo, unwanted by his current employers and seemingly unattractive to prospective new ones. Someone may opt to take a punt on him before the window closes, however, particularly if Liverpool are willing to sanction a cut-price departure.

Chadli didn’t even make the substitutes’ bench in either of Tottenham’s opening Premier League fixtures against Everton and Crystal Palace, with his three-year spell at White Hart Lane potentially nearing an end. The Belgian has never really managed to establish himself as a key player in north London, but that hasn’t put Swansea or Borussia Dortmund off according to reports, and it wouldn’t be at all surprising to see the 27-year-old leave the club before the end of next week, particularly as Marseille wideman Georges-Kevin Nkoudou seems set to join Spurs.

Inler was viewed as Esteban Cambiasso’s replacement when he signed for Leicester last summer, but things didn’t quite work out as planned: the Switzerland international played second fiddle to Danny Drinkwater and N’Golo Kante all year, appearing for only 195 minutes in the top flight as he only just about qualified for a Premier League winner’s medal. Inler’s still not in Claudio Ranieri’s plans despite the sale of Kante, meaning a parting of ways seems inevitable.

Once tipped by Sir Alex Ferguson as a player with potential to become Manchester United’s greatest player of all-time, Jones could be for the chop this month. Stoke are thought to be one of the clubs interested in capturing the 24-year-old, whose career has stagnated in the last couple of years. Injuries certainly haven’t helped, but Jones’s more recent performances make Ferguson’s prediction seem even more baffling than it did at the time.

Markovic is still awaiting his first Liverpool appearance under Jurgen Klopp, which doesn’t exactly bode well for his future on Merseyside. Milan are thought to want the winger at San Siro and Lazio have also been spoken about as a potential destination, although it’s not really clear how much Liverpool will ask buying clubs to stump up: recouping the £20m they paid for the Serb two years ago would be a big ask, but the Reds were adamant that they would only sell Christian Benteke for a similar figure to the one they bought him for.

The fact that Remy saw so little action even in Chelsea’s worst season in two decades – the Frenchman started just three Premier League matches – says everything about his position at the club. Although an injury to either Diego Costa or Michy Batshuayi could see the 29-year-old thrust back into the first-team picture, it’s likely to be another campaign on the sidelines for Remy if he opts to remain at Stamford Bridge. A move away – either on a permanent or temporary basis – would be sensible for all parties.

The three phases of Arsene: How Wenger's approach to transfers has changed down the years

Meet Alessio Romagnoli: who is the defender Chelsea have their sights on?

The long read: Guardiola's 16-point blueprint for dominance - his methods, management and tactics

Toure’s predicament at Manchester City has been overshadowed by Hart’s, but the midfielder who worked with Guardiola at Barcelona doesn’t appear to have much of a future at the Etihad Stadium either. It’s difficult to see which European clubs would be both interested in signing the 33-year-old and able to match his current pay packet, a situation which could see Toure hotfoot it to MLS or the Chinese Super League.

In his youth team days at Arsenal, explosive wideman Gnabry was a cut above the rest. Indeed, he impressed when given first-team opportunities by Arsene Wenger, particularly in 2013/14 when he made nine first-team appearances in the Premier League and grabbed his first goal at Swansea. A shiny five-year contract was just reward – but then injury woes struck. The German was loaned out to West Brom last season but managed only three appearances in all competitions before being recalled in January. He's now back fit again, having scored six goals in as many games at the Olympics, and desperate for a club who'll give him regular minutes.