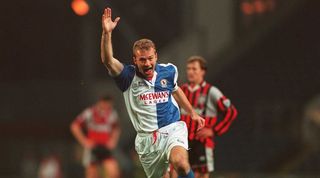 You have a mere ten minutes to guess 50 players, so get cracking. Just to be clear, these players aren't necessarily all English themselves - they merely finished in the top five scorers of England's top flight!

THEN TRY Quiz! Can you name the clubs who've been promoted from the Championship since 1999/2000?

Ahh, the 90s. Without getting too Abe Simpson on our younger readers, things used to be different back in our day.

Football as we know it didn't even exist at the turn of the decade - with the Premier League not kicking off until the 1992/93 campaign.

Foreign coaches were mad professors who banned Mars bars and all-night drinking sessions on the eve of matches, paving the way for the likes of Pep, Klopp and Jose. The latter of which is the star attraction in the new issue of the magazine, out now. #ShamelessPlug

So, in celebration of that barmy decade, and at the turn of a new one (a whole 30 years on - sheesh!) we invite you to name the top 5 scorers in every top flight campaign in the 90s.

CHELSEA Something isn't working for Kepa Arrizabalaga at Chelsea – can Frank Lampard find a way to fix it?