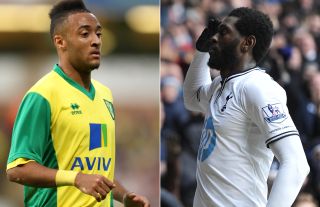 The noises out of Norwich have started to evoke memories of epic cinema release Speed. But rather than a bus going kaboom should it dip under 50mph, Chris Hughton's ejector seat in the dugout is poised to propel the manager into the stratosphere should his side drop below the dreaded dotted line.

Uninspiring displays and a chronic lack of goals at home (just 11 in 14 league games, the division’s lowest) have led to growing unrest among fans, and while Norwich are the only club in the division's bottom six not to have made a managerial change, chief executive David McNally has hardly been subtle about the prospect of that changing: “Chris has been told in no uncertain terms, 'Get us out of that position and keep us out of that position’,” before later vowing to act quickly “if for any reason the manager left”.

Hughton needs a result and needs it quick. An inability to take chances is proving increasingly costly, as seen in recent defeats at West Ham and Cardiff. “It's been a little bit too familiar this, where our level of performance has been good, we've been creating chances but not putting them away,” the manager lamented at Upton Park.

Centre-back Sebastien Bassong admitted afterwards that Norwich’s season is “turning into a nightmare” but at least fellow stopper Joseph Yobo, recently acquired on loan from Fenerbahce, is relishing a relegation scrap, saying: “It is a challenge but I like that extra motivation. I understand the situation Norwich are in. I am excited.”

On the plus side, the Canaries have kept clean sheets in their last three Carrow Road outings, edging Hull 1-0 before successive stalemates against Newcastle and, creditably, Manchester City. But on Sunday they run into a Tottenham side back in form.

Tim Sherwood’s side have put the horror of their home humping by Man City swiftly behind them, registering impressive wins over Everton and Newcastle. And in this unpredictable Premier League of 2013/14, Tottenham are ‘only’ seven points off the top, the closest they’ve been with 12 games remaining since the league’s formation in 1992.

To maintain that charge, maximum points from Norwich and Cardiff are a must, considering a challenging run of games against Chelsea, Arsenal and Liverpool lie in wait. They’ll fancy their chances with Emmanuel Adebayor bagging five goals in as many games and at the peak of his powers. “If you give confidence to someone like Ade, he will repay you so much more... that is what is happening now,” said team-mate Younes Kaboul.

Although Spurs are without a win in their last two trips to Norfolk, conceding two late goals to lose a League Cup tie in 2012, Carrow Road had previously been a happy hunting ground for the north Londoners, winning five away games on the trot there between 1993 and 2011, four of them by 2-0 scorelines.

Norwich could be boosted by the return of Jonas Gutierrez, Ryan Bennett and Jonny Howson, but Michael Turner and Elliott Bennett stay sidelined.

Danny Rose is expected back for Spurs, who remain without the services of Erik Lamela – also out of the Argentina squad due to injury – Vlad Chiriches and Gylfi Sigurdsson.

Hughton is hoping the return of the England Under-21 international can lift Norwich away from danger long before their hellish run-in against Liverpool, Manchester United, Chelsea and Arsenal.

“We have to be solid and difficult to beat but it is impossible to pull that off without having an attacking threat. You have to relieve pressure and give yourself a chance to score goals,” said the City boss.

“Nathan perhaps lacks that end product at times, but he gives us a really good outlet. That is there to see and he keeps getting in those positions. He is 19 and he has everything in front of him. He would have possibly played more games than even he would have envisaged when he first came here at the start of this season.”

The former Birmingham flyer has started each of Norwich’s last two games against West Ham and Man City, setting up 3 chances for team-mates on both occasions. Against Manuel Pellegrini’s men, the youngster attempted 6 take-ons, twice as many as any other Norwich player, while the 16 passes he collected from Russell Martin was the home side’s most frequent combination by a considerable margin.

Hughton was associated with Spurs for 23 years, making almost 400 appearances as a highly regarded full-back from 1977-90, and winning two FA Cups and the UEFA Cup. After spells with West Ham and Brentford he returned in 1998 to spend 10 years in the dugout as assistant manager. He also served as caretaker boss on two separate occasions, including for six matches in 1998, winning half of them. In four games as Norwich boss against Tottenham he’s only lost once, and that was away at White Hart Lane last September.

Sherwood spent almost three years at Carrow Road as a player from 1989-92, making 88 appearances and scoring 13 goals before becoming one of Kenny Dalglish’s first signings for Blackburn Rovers.

Sherwood’s decision to leave some of his big names at home, rather than send them to Dnipro, pays dividends in another tight Carrow Road contest. 1-2.