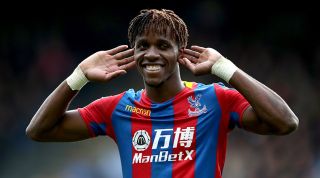 At the conclusion of a Premier League season dominated by one of the division's finest ever teams, and when Burnley have been alone in threatening the status of the established top six, it came as little surprise to see the PFA's Team of the Year formed entirely of those who had hoped to challenge for the title.

But that also means overlooking others further down the table who also deserve recognition for their efforts this season. So what would happen if only one star from any team could make a finest XI selected amid stricter criteria? We’ve had a go at finding out...

In what will be considered a disappointing season for Manchester United, it’s only De Gea who really emerges with his reputation enhanced.

The goalkeeper's consistency has been surpassed only by his penchant for making match-defining saves – particularly those in December's 3-1 victory at Arsenal – and which have so often masked the limitations of those selected in front of him.

A haul of 21 clean sheets from 33 appearances for Manchester United this season helps many to the conclusion that he’s the finest goalkeeper in the world.

Enter our prize draw with Emirates for a chance to win a pair of tickets to the FA Cup final! Details below...

But for Newcastle's resilient defence – one that manager Rafael Benitez has long been credited with organising – their lack of a regular goalscorer may have led to relegation.

That backline improved after the January arrival of goalkeeper Martin Dubravka, but before then it didn’t feature a single established Premier League performer. That, however, only demonstrates the speed with which Lascelles has adjusted from the Championship, including the growth in his maturity and abilities as an on-field organiser.

Conceding the division's seventh-fewest number of goals has been Newcastle’s making. Lascelles may even prove their finest defender since Jonathan Woodgate, who left for Real Madrid in 2004.

When Burnley sold Michael Keane – beyond Sean Dyche, perhaps their most important figure as they successfully avoided relegation last season – it was widely felt that a return to the Championship had become almost inevitable.

Instead, while Keane's reputation has suffered at Everton, Tarkowski has convincingly replaced him and been equally important in the division's fourth-strongest defence – to the extent that he has since made his England debut.

That Swansea under Paul Clement were again bound for the Championship, this time before Carlos Carvalhal's intervention, owed almost entirely to their lack of goals. Such woes were hardly surprising after the departures of Fernando Llorente and Gylfi Sigurdsson last summer, so that the Swans even have a chance of staying up this season is largely down to their defence.

Mawson is not only the key figure in that backline, but has been Swansea's finest performer in a season where he has also emerged as a convincing leader. No team in the bottom half of the table has conceded fewer goals.

Being the most influential footballer in the division's most convincing, title-winning team arguably makes De Bruyne the player of the season.

That there has been disappointment in his recent, slight performance dip is merely because the levels he and Manchester City showed before were so astonishing. The Belgian could play for any team in the world.

Tottenham's talented midfielder has excelled so much that he’s arguably outshone even Harry Kane, the scorer of 37 goals in all competitions this season.

Eriksen's extraordinary vision and abilities have long been recognised, but even if he’d already excelled in becoming one of Spurs' key figures – and at Ajax, and for Denmark before then – this is the season in which he has truly fulfilled his potential.

The 26-year-old has demonstrated desire and consistency that has elevated his masterful technique – culminating in 10 goals and as many assists so far this season.

Unless Arsenal win the Europa League, Ramsey may just represent the success story of their season. Jack Wilshere's re-emergence has also been a significant positive, but their Welsh midfielder's sense of timing and 10 goals – particularly since Alexis Sanchez's departure – have made him their finest player in Arsene Wenger's final season.

That’s quite fitting too, given his progress under the Frenchman over the last decade.

Few would blame Antonio Conte for Chelsea's failings this season, but it perhaps shouldn’t be overlooked that much of the Italian's unhappiness stems from their inability to recruit Alex Sandro last summer – despite Alonso similarly excelling throughout 2016/17.

The Spaniard has been one of the few Blues to maintain the standards he set when Chelsea secured the title 12 months ago, continuing to enhance his reputation as a masterful set-piece taker and developing the crucial ability to score important goals.

De Bruyne's biggest rival as PFA Player of the Season has unquestionably been the signing of last summer. His £34m arrival at Liverpool from Roma was generally met with indifference – incredibly, because it felt like a lot of money at the time. Hindsight tells us otherwise.

In reality, the extent to which he and Virgil van Dijk have strengthened Jurgen Klopp's team makes them City's biggest threat over the coming 12 months.

The striker's remarkable volley against West Brom in October, with his less-favoured left foot after a lofted Riyad Mahrez pass, was arguably the finest goal of a career that has produced numerous important finishes.

In what has turned out to be a difficult season for his club, following the dismissal of former manager Craig Shakespeare and poor second half of the campaign under Claude Puel, Vardy has still netted 17 league goals. While others around him have underwhelmed, the 31-year-old is still his side’s dependable talisman.

Without Zaha, Palace would have surely been relegated. Instead, with his creativity and goal threat up front, the Eagles have gradually climbed clear of the bottom three and now look destined for a safe mid-table finish.