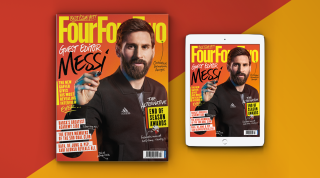 “Hola and welcome toFourFourTwo (or should that beFourThreeThree?!). My first interview with the magazine was in 2006, and since then I’ve been interviewed a few times. But this is the first time I’ve been guest editor, and what a privilege it is.

“As well as the main cover interview in which I discuss a selection of my career highlights, there’s a piece on the other members of the 500-goal club (which I had the great honour of joining during the week that I edited the magazine) and a look back at the La Masia team I played in, featuring Cesc Fabregas and Gerard Pique to name but two of a host of team-mates who were brilliant both on and off the field.

“We also went over to Milan to speak to my former Argentina captain Javier Zanetti, while Ronaldinho picks his Perfect XI – here’s hoping I've made the cut...”

From being ‘a little nervous’ about his Barça debut, to the ‘beautiful memory’ of bagging Olympic gold with good pal Sergio Aguero and a ‘perfect night’ scoring his 500th goal to win El Clasico against Real Madrid, the new gaffer talks us through the most iconic moments of a stellar career – and then puts us back to work.

When Lionel Messi scored in the 92nd minute of April’s Bernabeu Clasico, he not only won Barcelona the game – he also joined an exclusive band of players who have scored 500 times for only one club. And he’s in pretty good company...

Argentina loves the passion and rage of a local derby so much, the league calendar dedicates a whole weekend to them. And Boca-River isn’t even the most fearsome.

If you thought Manchester United’s Class of ’92 was the ultimate example of a club’s ‘golden generation’, think again. In the early 2000s, three greats played in the same side at Barcelona’s La Masia academy – and blew all of their rivals away.

Suave off the pitch, sophisticated on it, successful everywhere he went: it’s no wonder the tributes poured in when Xabi Alonso hung up his boots. But don’t worry – as the midfield maestro himself tells FourFourTwo, he’ll be back...

What will Brexit mean for football?

Well it could be anything from a golden age in youth development to the end of the Premier League’s megabucks global appeal – it’s more complex than just stopping Johnny Foreigner coming over here and nabbing all of our medals.

The genius of RB Leipzig

They may be the club Germany loves to hate but, according to sporting director Ralf Rangnick, the Bulls are shaking up the Bundesliga with brains over branding.

Former Inter captain Javier Zanetti answers your questions in this month's One-on-One, including: How did Jose Mourinho transform the Nerazzurri? Is he still fuming about the Calciopoli scandal? And why has he never changed his haircut?

Bastian Schweinsteiger tells all about Manchester United, World Cup glory and life with Chicaco Fire, Robert Pires talks FFT through his cheeky chip for Arsenal at Aston Villa, Blackburn hero Benni McCarthy recalls the games that changed his life and Les Ferdinand offers his top tips on how to redecorate your living room.

In October 1982, Charlton Athletic broke the bank to bring in the Ballon d’Or winner from Barça. But if it all seemed too good to be true, that’s because it was...

FourFourTwo Performance speaks to Southampton flyer Nathan Redmond, who explains how to adapt to the No.10 role. Plus, fitness expert Brock Christopher tells you how long to rest for ahead of pre-season, and we find out why a Nintendo DS has been helping Burnley goalkeeper Tom Heaton to keep his reflexes razor-sharp.

Grab it now: available in print and on iPad and iPhone from Thursday, June 1. Subscribe to FourFourTwo here!