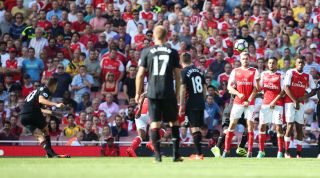 There’s nothing like throwing your arms into the summer air, celebrating your club’s first goal of a fresh new season. Unless it’s an injury time consolation when you’re 5-0 down at the Etihad and Pep Guardiola is using the end of the game to experiment with an entire team of 11 overlapping full-backs.

That doesn’t feel so great. But there is something memorable about the first round of league fixtures – and the 2016/17 Premier League delivered a thriller, as Liverpool beat Arsenal 4-3. In fact, goals abound in the opening weekend last year, as only Crystal Palace and Burnley failed to score.

It actually took Palace took until the 93rd minute of their third match to net their first goal. Well in, Pards. But we’re not asking you to recall when a team scored - but who netted that first goal.

Below is the duck-breaker for each club, the opposition and the playing position of said scorer. Six minutes are on the clock, so have a crack then let us know how you got on @FourFourTwo. Share it too, why not eh?