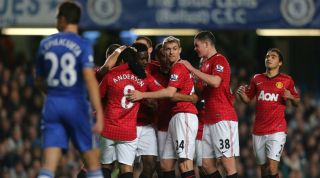 Chelsea take on Manchester United in the FA Cup tonight, in a match-up that has become one of the most hotly-contested rivalries in English football.

Both teams may be out of the title race this season, but there have been a number of classic cup matches between the sides in recent years – including three FA Cup finals since 1994.

With this the most anticipated tie of an otherwise underwhelming fifth round, we decided to look at this fine fixture more generally from years gone by.

So to prepare you for tonight’s kick-off, we want you to name the last 50 players to have scored in competitive Chelsea vs Manchester United matches – including Premier League, FA Cup, Champions League, Community Shield and League Cup games (but not penalty shootouts or own goals).

You have 10 minutes, and once you’re done, why not let us know how you did at @FourFourTwo? There’s pride at stake...

THEN READ.. The Lukaku conundrum: why Ole Gunnar Solskjaer must deMourinhoify his £75m man