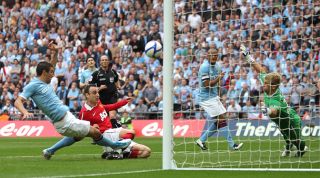 Not a prolific Premier League season if we’re being brutally honest, as the Golden Boot was shared for the first time since 1998/99 (when three players were tied on a paltry 18). Still, at least we got some variety in the scoring charts as lads from Fulham, Blackpool, Wolves, and Bolton all hit 10+ goals for the season.

Manchester United won the actual league, while Tottenham’s Gareth Bale was named PFA Player of the Year and Scott Parker picked up the Football Writers’ gong. That’s despite West Ham finishing bottom by six points - so it’s pretty clear Parker’s team-mates weren’t pulling up any trees (or scoring any goals, which is arguably more important).

So no Hammers on the list below, but can you name the 24 players who did reach double figures for the season? Six minutes are on the clock to have a crack, then let us know your score @FourFourTwo - we’ll retweet them if you don't give answers away - before challenging some close pals/bitter enemies.