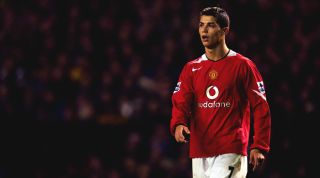 Four minutes on the clock, 50 players to guess - simply click for whether you believe they represented Arsenal, Chelsea, Manchester City or Manchester United.

NOW TRY Quiz! Can you name the 29 players with 100+ Premier League goals?

It's FA Cup semi-final weekend! It's taken a long while to get here, but we're down to our final four.

It's not very often that the final four of the FA Cup looks as strong as this, either. These clubs have a whopping 39 cups between them in their cabinets, and the last time that one of these four teams wasn't in the cup final was way back in 2008.

So since the usual suspects are lining up at Wembley this weekend, we thought we'd ask you to recall some of the heroes - and some of the lesser-known names - who have been employed by these four.

50 players will flash up on the quiz - all you have to do is click on the club you think they represented.